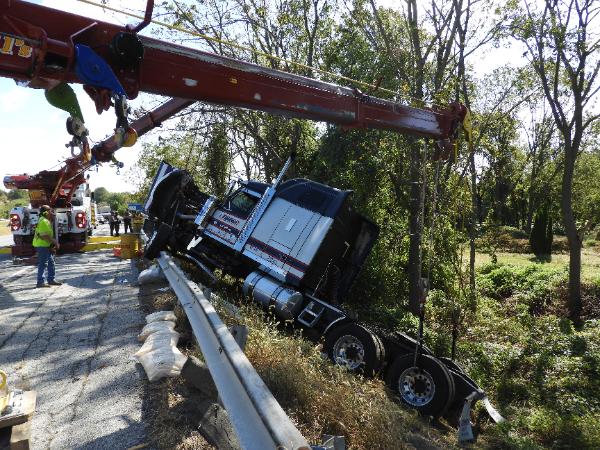 Contacted by the Pennsylvania State Police Avondale Barracks requesting us to respond to the Route 1 bypass
Northbound north of Route 796 in Penn Township for a tractor trailer that was reported to be over the embankment.
From radio traffic from the scene, we were also aware of a fuel spill at the scene.  Based upon the information gathered,
two of our heavy duty sliding rotator recovery units, and one of our truck tractors were dispatched to the scene.
Additionally, we contacted Null’s Recovery & Site Restoration to respond to the scene with one of their Incident
Response Units and their traffic control equipment.

Upon arrival, a Western Star sleeper tractor pulling a 45′ spread axle flatbed was found to have for unknown reasons,
left the roadway, took out several hundred feet of guard rail, went over the embankment and came to rest with the
driver’s side front wheel hanging onto the edge of the guard rail.  The fire department was onscene.  There were
multiple State Police units onscene.

One of our rollbacks was dispatched to the scene at this point, to transport the damaged guard rail from the scene.

This would all be done while maintaining one open lane on the Northbound side of the bypass.  Southbound traffic would
not be disturbed in any manner. NR&SR set-up a lane closure and work our for our team.

One of the rotators hooked to the front of the damaged tractor.  The driveline was disconnected, air was supplied to
release the brakes.  Wireless towlights and secondary attachments were installed.  The loose truck parts were secured.
The truck and trailer were then towed from the accident scene to Null’s of Cochranville where they were placed in our
secure storage yard for a pending DOT Inspection.

The remainder of our equipment remained onscene assisting NR&SR with cleaning up the fluids and debris.  The
sections of guard rail that NR&SR had cut were loaded onto the rollback and secured for transport.

A HUGE THANK YOU TO THE WEST GROVE FIRE COMPANY AND THE
PENNSYLVANIA STATE POLICE FOR THEIR HELP ONSCENE!