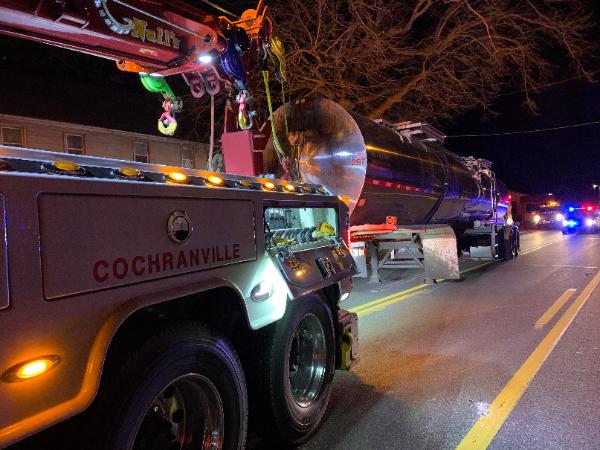 Contacted to respond to Lincoln Highway in the area of Vintage Road for a tanker trailer that had disconnected from the
tractor.  We were advised that it was blocking the roadway and had broken airlines.  Based upon the information we
were  given, a heavy duty wrecker and truck tractor to repower the trailer were dispatched to the scene.  Additionally, we
contacted Null’s Recovery & Site Restoration to dispatch their service truck to the scene to assist with making whatever
repairs needed to be made.

While enroute, we were advised that there were fluids spilled on the roadway.  We contacted Null’s Recovery & Site
Restoration again at that point to dispatch one of their Incident Response Units to the scene for the spill.

Upon arrival the tanker trailer was found to have disconnected from the tractor.  The fifth wheel on the tractor was still
latched.  The driver was advising that the tractor would not stay running due to low coolant levels. The trailer was
blocking the westbound travel lane and the center turn lane.

NR&SR arrived and applied absorbents to the fluids that were on the roadway.  The fluids had puddled at the edge of
the roadway where it met a yard.  The fluids were removed from the surface.

Once the fluids were contained and to a point that they would not be spread any further, the heavy duty wrecker was
moved into position to lift the trailer.  The trailer was lifted and the landing gear extended.  The trailer was then set onto
the landing gear.  Our tractor then backed under the trailer and moved it out of the roadway.  The heavy duty wrecker
then hooked to the rear of the tractor and prepared to tow it from the scene.  Our personnel assisted NR&SR with
cleaning up the roadway.

The tractor and trailer were both transported to Null’s of Cochranville.  The coolant level was topped off in the tractor,
the driver was then able to drive it back to the terminal so that repairs could be made.  The trailer was placed in our
secure storage yard.

A HUGE THANK YOU TO THE KINZER FIRE COMPANY FOR THEIR HELP WITH
TRAFFIC CONTROL AND SCENE SAFETY!