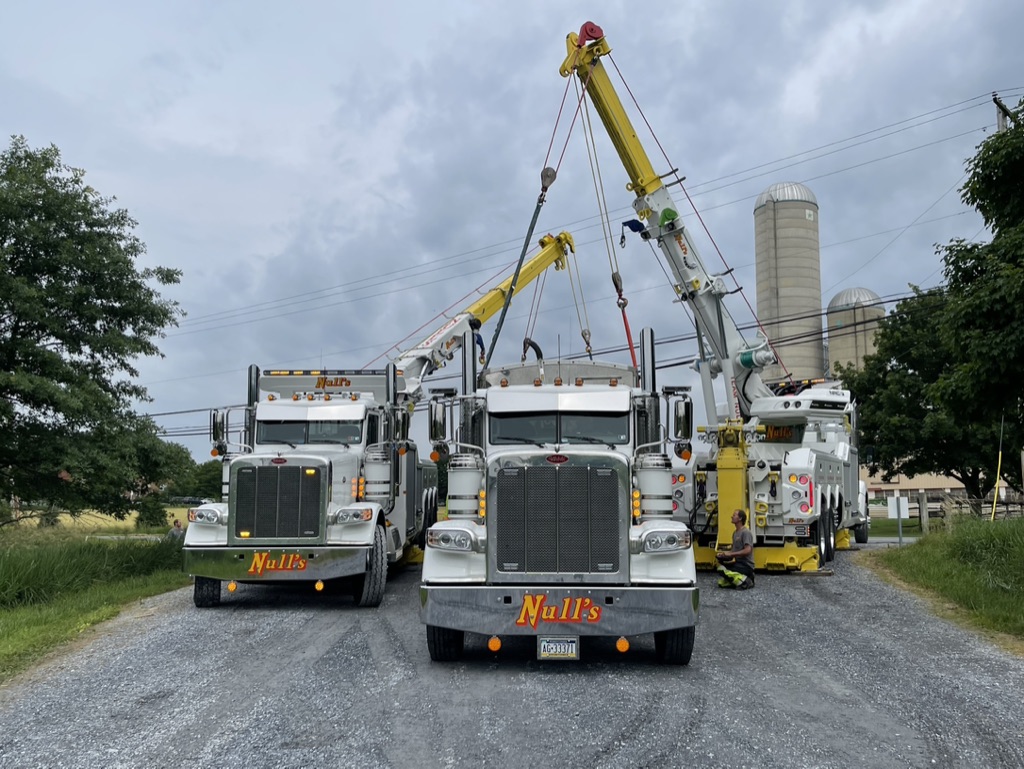 Contacted to respond to Penn Grant Road and Hans Herr Dr in West Lampeter Township to the scene of a tractor trailer that had overturned. We were advised that it was hauling a load of grain and that there was an active fuel and oil leak. Based upon the information we were given, we dispatched two of our sliding rotator recovery units, a heavy duty wrecker, a tractor to repower the trailer, and contacted Null’s Recovery & Site Restoration to respond to the scene for the spill containment and clean-up.

Upon arrival, a Kenworth tractor pulling an Eby hopper bottom trailer was found to have been traveling east on Penn Grant Road when it left the right side of the roadway. The unit struck a utility pole, went over the embankment, into a wetland, through a creek. The unit completely cleared the creek. After clearing the creek, the unit overturned onto it’s passenger side. Approximately half of the load spilled out of the trailer onto the ground. The truck’s hydraulic tank had a hole punched in it and was leaking. There was also a fuel leak.

We met with the Police, Fire, and the operator of the truck. We discussed a recovery plan, the oerpator of the truck advised that a vac truck was enroute to the scene with an unknown ETA. It was determined that the truck and trailer would be separated. The truck would be uprighted and removed from the scene. At that point we would see where the vac truck was and handle the trailer accordingly.

Our team worked to separate the truck and trailer. The heavy wrecker was used to winch the truck backwards towards the trailer to release the pressure from the fifth wheel plate. The release was able to be pulled. One of the rotators winched the tractor forward away from the trailer’s king pin. The second rotator was rigged to upright the truck and gently set it back onto it’s wheels. The truck would be setting back down onto concrete cattle gates so extreme care had to be used to not cause damage to them.

The two rotators then worked together to lift the trailer out of the wetland and return it to an upright position. Once upright, the trailer was rotated between the two rotators and set onto the driveway where our tractor could hook to it and transport it from the scene. The trailer was transported from the scene to Null’s of Cochranville where it was also placed in our secure storage yard. The two rotators were returned to travel position. All of the rigging that was used was inspected and returned to it’s respective location.