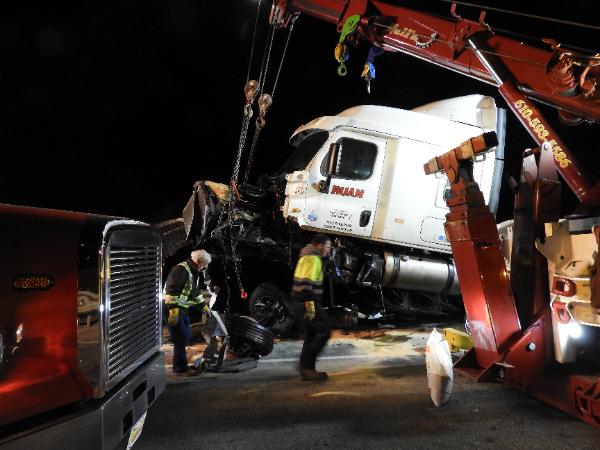 Contacted by the Pennsylvania State Police Avondale Barracks to respond to Gap Newport Pike and Friendship Church
Road in West Fallowfield Township for a two vehicle accident. We were advised that one of the vehicles was a tractor
trailer.

Null’s Recovery & Site Restoration had been dispatched to the scene at 0251 for the fuel spill from the tractor trailer. We
contacted NR&SR who advised that the loaded tractor trailer was into the guard rail and had major damage. They were
advising that there was a large debris field of truck parts. They also advised that the sedan was severely damaged and
that the motor and transmission was out of the vehicle.

Upon arrival, we were advised to stand-by while PSP and the fire department finished their tasks. A scene survey was
performed. It was found that the Freightliner tractor and loaded van trailer was travelling southbound on Gap Newport
Pike when a northbound Chevy Cruze crossed the yellow line, travelled through  the turn lane, entered the southbound
lane and struck the tractor trailer head on. After the impact, the tractor trailer struck the guard rail. The guard rail
became entangled in the truck’s axles and frame rail. The truck suffered major damage. NR&SR had pumped the fuel
from the tanks. The Cruze went back across the roadway after the impact, struck the guard rail on the northbound
shoulder and came to rest facing southbound on the northbound side of the of the  roadway. The engine and
transmission from the Cruze were wedged under the guard rail.  The truck’s hood and fender were down over the
embankment.  The hood was approximately 50′ over the embankment in the water way.

Once given the go ahead to begin the recovery of the tractor trailer, our equipment went to work cleaning up the scene.

The car was winched into position so that it could be loaded onto one of our rollbacks. Once the car was loaded, the
skid steer loader was used to remove the engine and transmission from under the guard rail. The engine and
transmission were then loaded onto the rollback and secured. The car’s roof and doors which had been removed by the
fire department in order to extricate the driver were loaded and secured. The car was transported from the accident
scene to our facility. Once at our facility, the car was unloaded in our secure storage yard.

The rotator then rigged to the rear of the tractor and lifted it clear of the guard rail. The back end of the truck was set
onto the shoulder of the roadway. The rotator then rigged to the front end of the tractor. The engine was torn loose from
the driver’s side frame rail. The tractor was stabilized, NR&SR then cut the guard rail so that the front of the truck could
be lifted back onto the roadway. The section of guard rail that was wedged in the truck was brought back onto the
roadway with the truck. The front axle of the truck, was removed from under the truck. The truck’s diesel particulate
filter  was also removed from under the truck.

Once on the roadway, the rotator held the truck while the heavy duty wrecker hooked to the front end of the truck and
prepared to tow it from the scene. The driveshaft was removed, the brakes on the truck were caged, the loose truck
parts were secured.

Our thoughts and prayers are with all those involved with this incident.

A HUGE THANK YOU TO THE COCHRANVILLE FIRE COMPANY, ALONG WITH THE MUTUAL AID FIRE POLICE
UNITS THAT RESPONDED TO THE SCENE FOR THEIR HELP!  AS ALWAYS, IT IS GREATLY APPRECIATED!