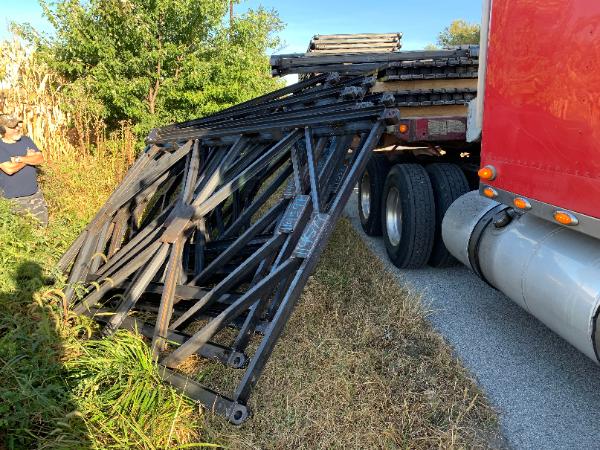 Contacted to respond to Route 41 between Glen Run Road and Highland Road for a tractor trailer that had lost part of
it’s load.  Based upon the information we were given, a heavy duty wrecker was dispatched to the scene.

Upon arrival, it was found that the load of bridge sections had shifted and fell part way off of the trailer.  The load was
still leaning against the trailer.

It was determined that the load would need to be lifted and stabilized while the trailer was moved away from the load.
The load could then be lowered to the ground where it could safely be rigged and re-loaded onto another trailer from
the company that was enroute to the scene. In order to the do this, the slow lane on the southbound hill would need to
be closed to allow a safe work area.

Additional resources were dispatched to the scene to handle the lane closure and assist with reloading the load.  Once
the lane was closed, our heavy duty wrecker and excavator worked to get the load clear of the trailer.  The trailer was
then moved.  The load was then reloaded onto the replacement trailer.