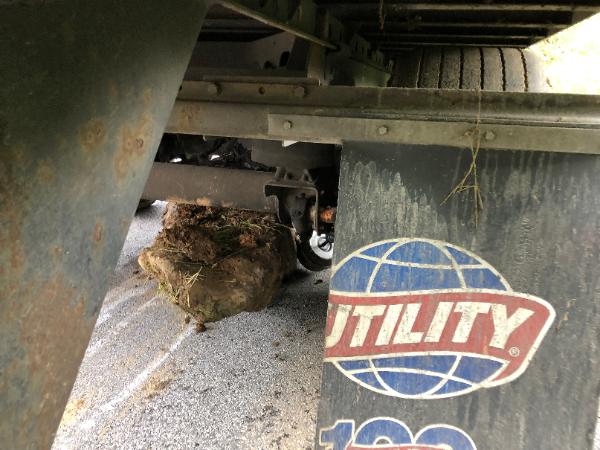 Contacted by PSP Avondale to respond to Routes 796 and 926 for a loaded tractor trailer that was stuck on top of
several large boulders.  While enroute to the scene, we were called and cancelled.  A short time later, we were re-
dispatched to the scene.

Upon arrival, the loaded unit was found to have taken a turn too sharp, causing the tandems to leave the roadway and
go over top of three large boulders. The boulders caused damage to the trailer’s brake chambers and air lines. The
driver continued dragging the rocks for several hundred feet before being stopped by Fire Police.

At that point, a service truck, truck tractor, and skid steer loader were dispatched to the scene as well.  The heavy
wrecker lifted the rear of the loaded trailer. The trailer was moved clear of the rocks.  The service truck worked to make
temporary repairs so our tractor could transport the out of service trailer from the scene to our facility.

The skid loader arrived on one of our rollbacks and was used to carry the boulders back to where they had been drug
from.  The damaged trailer was transported from the scene to our facility.

A huge thank you to the Cochranville and Avondale Fire Police for their help on the second incident
of the day in Londonderry Township, as always, it is greatly appreciated!