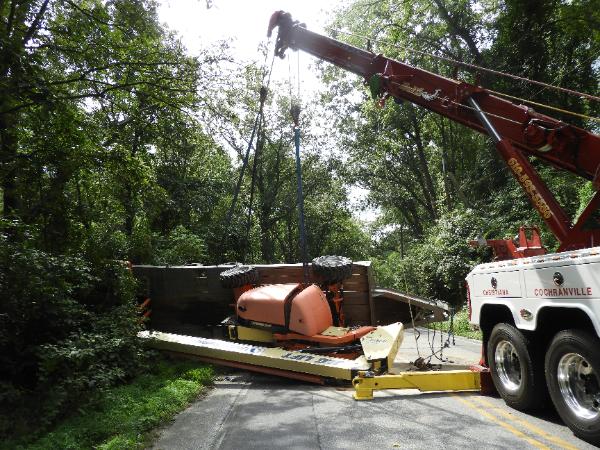 Contacted to respond to Route 272 in the area of the county line on the Chester County side of the creek for a Mack
dump truck and tag along trailer that was hauling a man lift that had overturned.  It was requested that we respond with
two rotators to recover the machine and trailer.  We dispatched two of our heavy duty sliding rotator recovery units, our
low boy trailer to haul the machine, and contacted Null’s Recovery & Site Restoration to respond to clean up the fluids
from the machine.

Upon arrival, the Mack dump truck was upright, with the overturned trailer still attached to it.  The back end of the dump
truck was approximately one foot of the ground.  The pintle hitch was bound and preventing the truck and trailer from
being able to be separated.  The boom lift was on it’s side and had suffered major damage from the impact of it
overturning.

One of the rotators was positioned to lift the rear of the Mack dump truck and relieve some of the pressure on the pintle
hitch.  The second rotator was used to lift and stabilize the trailer.  The two rotators worked together to separate the
truck and trailer.  Once separated the Mack was pulled forward away from the scene and able to driven from the scene
to the customer’s facility.

The trailer was then uprighted and hooked to by a replacement truck and moved from the area.

We then assisted NR&SR with cleaning up the roadway and spill.  We then cleared the scene.  The machine was
transported to Null’s of Cochranville where it was placed in our secure storage yard.

A HUGE THANK YOU TO THE UNION FIRE COMPANY NO. 1 OF OXFORD FIRE
POLICE FOR THEIR HELP WHILE WE CLEARED THIS INCIDENT.