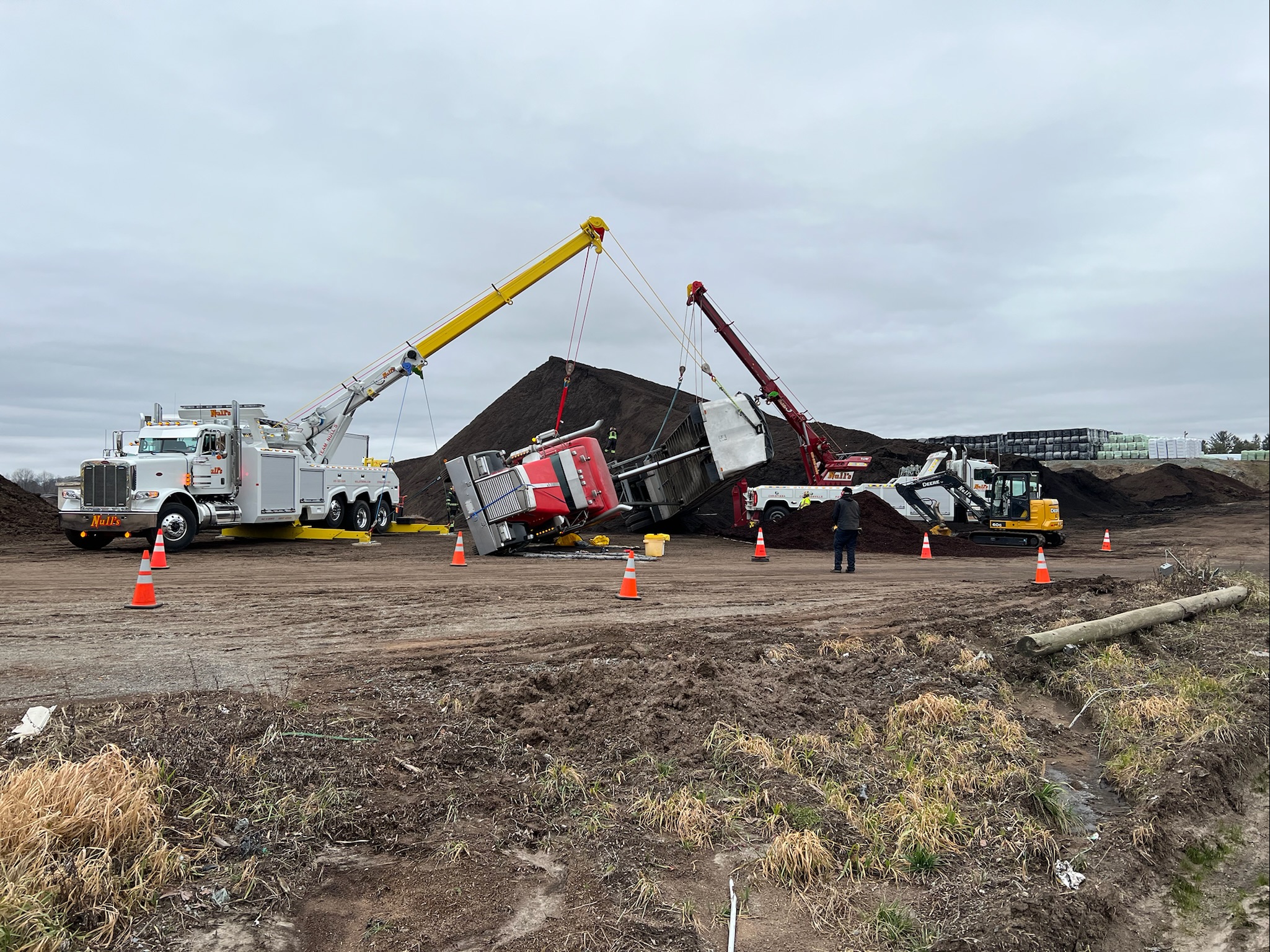 Contacted to respond to the Scott’s Company on Reedville Road in Oxford PA for a loaded tractor trailer that had overturned while dumping it’s load. After speaking with the driver we were advised that the trailer was in the raised position and that it still had a majority of the load in it.

Based upon the information we were given, we dispatched two of our heavy duty sliding rotator recovery units, a recovery supervisor, our mini excavator, and contacted Null’s Recovery & Site Restoration to respond to the scene.

Upon arrival, the Kenworth tractor pulling a frameless dump trailer was found to have overturned onto the driver’s side while it was dumping it’s load. There was a large oil and fuel spill. Scott’s rep’s had deployed containment equipment to prevent the spill from entering the product and condemning the load. We spread additional absorbents to further contain the spill.

The excavator wen to work unloading the cargo from the trailer. The two rotators were rigged to the truck and trailer. It was found that the cylinder on the trailer would not collapse as the controller for the raise lower was air controlled and not accessible with the truck on it’s side. The rotators rigged to upright the unit with the bed in the raised position.

Once the cargo was unloaded, the truck and trailer were lifted back to an upright position and slowly lowered to it’s wheels to prevent any secondary damages. Once upright, air was supplied to the unit, we could now access the controller for the dump cylinder. The controller was placed in the lower position and the one rotator lowered the trailer from the raised position to the transport position. The excavator was used to recenter the trailer’s box onto the subframe.

All of the rigging was removed and returned to it’s respective location. The truck and trailer were separated. One of the rotators hooked to the rear of the tractor. One of our truck tractors hooked to the dump trailer. The truck and trailer were transported from the scene to Null’s of Cochranville where they were placed in our secure storage yard.

The absorbents and spilled fluids were cleaned up and placed into a DOT transport salvage drum. The drum was loaded into the IRU for transport from the scene for disposal.