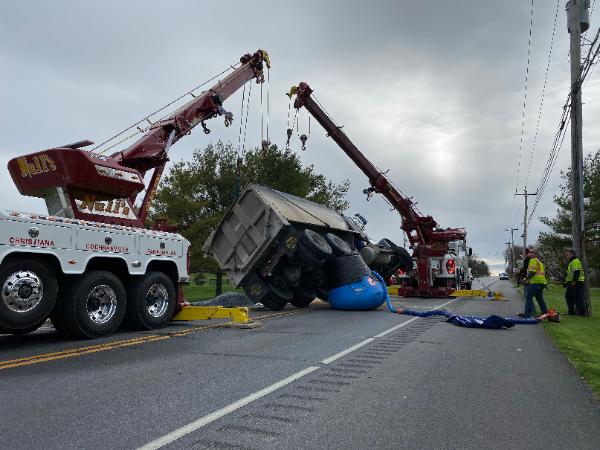 Contacted to respond to Route 41 and Keller Drive in Londonderry Township for a vehicle accident involving an overturned
tri-axle dump truck.  We were advised that the truck was hauling stone and that the cargo was spilled from the truck.  We were
also advised that the truck was leaking fluids.  Based upon the information that we were given, we immediately dispatched two
of our sliding rotator recovery units, our two skid steer loaders and street sweeper, and contacted Null’s Recovery & Site
Restoration to respond to the scene.

Upon arrival, a Peterbilt tri axle dump truck was found to have been travelling southbound on Route 41 just north of Keller
Road when it reportedly swerved to miss a collision with another vehicle, struck a tree, overturned onto it’s driver’s side and
slid on its side before coming to rest blocking the roadway with a majority of the load of stone spilled on the shoulder of the
roadway and the yard of the residence at the corner of Route 41 and Keller Dr.

NR&SR worked to contain the spill.

A landing cushion was placed at the front drive axle to control the landing of the still partially loaded truck and prevent it from
slamming to the ground.  The truck was slowly lifted back to an upright position.  Once the truck was uprighted, the two
rotators were returned to travel position.  The rigging was removed, inspected, and returned to its respective location.  The
rotator at the front of the truck hooked to it and prepared to tow it from the scene.  Air was supplied to the truck so that it’s
brakes could be released.

Our skid steers worked to clean the stone from the yard and the roadway.  The stone was loaded into one of NR&SR’s roll-off
dumpsters to be transported from the scene.  The roadway was swept of the stone.  Once the accident scene was cleaned
up, our equipment cleared the scene.  The dump truck was transported to our Cochranville facility where it was placed in our
secure storage yard.

A HUGE THANK YOU TO THE COCHRANVILLE, WEST GROVE, AVONDALE,
SADSBURYVILLE, AND KEYSTONE VALLEY FIRE POLICE UNITS FOR THEIR HELP WITH
TRAFFIC CONTROL DURING THIS INCIDENT!  AS ALWAYS, IT IS GREATLY APPRECIATED!