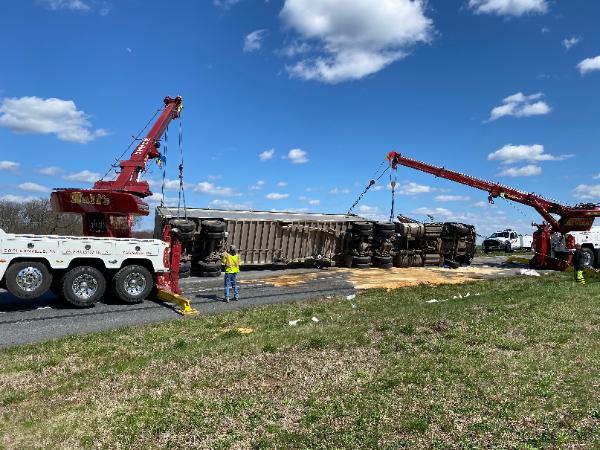 Contacted to respond to the off ramp from the Northbound Kennett Oxford Bypass to Limestone Road in Lower Oxford
Township for a loaded tractor trailer that was overturned.  We were advised that the tractor trailer was carrying corn and that
there was a fuel spill.

Based upon the information we were given, we dispatched two of our heavy duty sliding rotator recovery units, our tracked
skid steer loader, and contacted Null’s Recovery & Site Restoration to respond to the scene for the fuel spill and roll-off
dumpsters to transport the grain from the scene.

Upon arrival, the Kenworth tractor pulling an East frameless dump trailer was found to have overturned on the exit ramp onto
it’s driver’s side spilling approximately one half to three quarters of it’s load of corn onto the roadway and grass cloverleaf
area.  We immediately attempted to contact the trucking company to find out their wishes with the grain.  The State Police
were also attempting to make contact.

Null’s Recovery & Site Restoration began work to contain the diesel fuel, hydraulic oil, and engine oil that was leaking from the
truck.  The fire department had created a dam in the grass to prevent the liquids from flowing into a nearby storm drain.

The tractor suffered major damage from overturning, the trailer appeared to have somewhat minimal damage.

Once the spills were contained enough for our crew to start rigging the unit to be uprighted, the two rotators were moved into
position.  One of our crew members worked to remove the driveshaft on the tractor in order to prepare it to be towed from the
scene once upright.  The brakes were set on the truck and trailer to ensure it did not move once uprighted.

We were advised that PSP had made contact with the trucking company and that they were working to figure out what to do
with the grain.  PSP advised us to clean it up as the company had nothing in motion yet to do so and the roadway needed to
be reopened.

The two rotators worked together to lift the still partially loaded unit back to an upright position and slowly lower it back onto
it’s wheels to avoid causing any further damage.  Once on it’s wheels all of the rigging was removed, inspected, and returned
to it’s respective location.  The rotators were returned to travel position.  The rotator at the front of the unit hooked to the front
of the tractor.  The truck and trailer were then moved forward several hundred feet so that clean up of the corn and fluid spills
could begin.

Our skid loader worked to scoop the corn up and place it into NR&SR’s roll-off dumpsters so that it could be transported from
the scene.  Several of our personnel assisted with shoveling the corn into the skid loader bucket.

The batteries were disconnected on the tractor.  Air was supplied to the truck’s air system to ensure the brakes remained
released.  The truck and trailer were separated.  Wireless towlights were installed on the tractor.  One of our tractors hooked
to the trailer and prepared to transport it from the scene.  Straps were placed over the trailer to hold the damaged tarp in
place during transport.

A representative from the trucking company contacted us and stated that the load needed to be saved as it is organic grain.
They were advised that some of the load was contaminated by the fuel spill, and that we would do our best to save as much
as possible.

NR&SR with the assistance of some of our personnel worked to clean the fluids from the roadway and the grass area where
the spill occurred.

Once as much of the corn as feasibly possible was cleaned up from the scene and the fluids were cleaned up from the
roadway and the grass, our equipment cleared the scene.  The skid loader was re-loaded onto the rollback for transport back
to our facility.

We contacted the trucking company and advised them that there was one 20 yard roll-off can that was full, a second that was
approximately 1/2 full and that there was still corn in the trailer and asked what their wishes were with the corn.  They asked
that we do whatever we can to protect the cargo and that if we can put it inside that would be great.

Once back at our facility, the skid loader was unloaded. The damaged truck and trailer were both placed in our secure
storage yard.  NR&SR’s two roll-off containers were placed inside to ensue that the corn was preserved as best as possible
per the companies request.

A HUGE THANK YOU TO THE UNION FIRE COMPANY #1 OF OXFORD FOR
THEIR HELP WITH SCENE SAFETY AND TRAFFIC CONTROL.  AS
ALWAYS, IT IS GREATLY APPRECIATED!