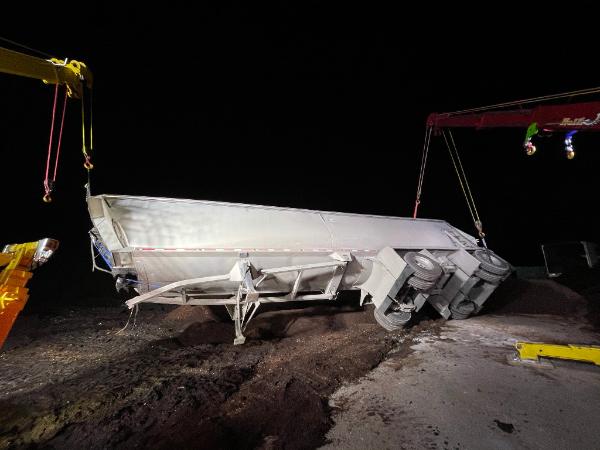 Based upon the information we were given, we dispatched two of our heavy duty sliding rotator recovery units and contacted Null’s Recovery & Site Restoration to respond with one of their incident response units and their mini excavator.

One of our rollbacks responded to NR&SR’s facility to load and transport their mini excavator to the scene.

Upon arrival, a Mac frameless dump trailer was found to have been dumping on a black-top roadway when the load appeared to have stuck causing the trailer to overturn onto the passenger side. As the trailer overturned, the telescopic cylinder pin broke at the base of the cylinder allowing the cylinder to break free. The trailer’s fifth wheel plate staid attached to the tractor’s fifth wheel but was severely twisted. Both of the drafting arms were severely twisted and cracked however both were still attached.

The two rotators were moved into position, one at the front of the trailer and one at the rear of the trailer. Both were set-up on work platforms. The rotators were rigged to the draft arms and cylinder to lift them off of the tractor so that it could be removed. The mini excavator was also used to hold the draft arms. Once the arms were secured so that they would not move, a cut off saw was used to cut the driver’s side arm. Once that arm was cut, that relieved the pressure
enough to allow the fifth wheel to be released. The tractor was then pulled forward, clear of the draft arms. Once clear, the fifth wheel was lifted off of the back of the tractor and set onto the ground.

At this point, it was beginning to get dark, one of our portable light towers was set-up to provide a safe work environment for crews working onscene.

With the tractor now clear, the mini excavator began cleaning out the load from the trailer.

The excavator was able to unable approximately 1/2 of the cargo that was still in the trailer. Due to how the trailer was laying on the pile, it could not access the back 1/2 of the trailer. The two rotators worked together to lift the trailer off of
the ground and rotate it upside down in mid air to dump the remaining cargo. Once dump, the trailer was returned back to an upright position.

Once the trailer was upright, the two rotators were returned to travel position. One of the rotators hooked to the front of the trailer and prepared to tow it from the scene. The trailer parts, including the fifth wheel plate were loaded into the
trailer. The trailer was transported from the accident scene to Null’s of Cochranville where it was placed in our secure storage yard.