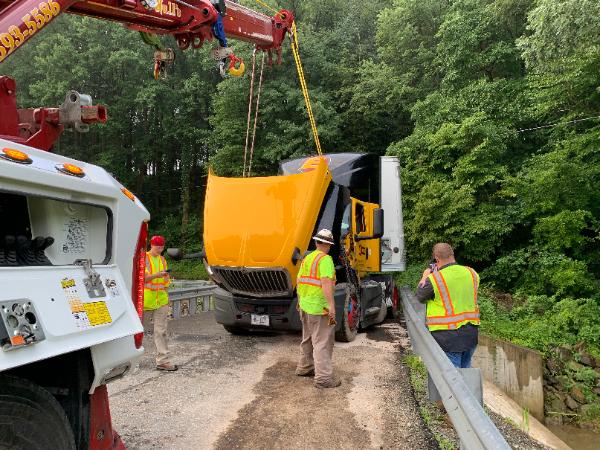 Contacted to respond to Camp Road and Lloyds Road in Nottingham PA for a tractor trailer that had struck the guard
rail and had a fuel leak. We were advised that the trucking company already had a clean up company onscene to
handle the fuel leak.

Based up on the information we were given, we immediately dispatched one of our heavy duty wrecker and a truck
tractor to the scene.

Upon arrival at the intersection, our operators were able to see the truck and trailer that we were called for, however
were unable to access with the equipment due to low trees. Our operators walked into the scene to assess the situation.
It was found that the loaded tractor trailer was being followed by a second tractor trailer, which were both following
their GPS and attempting to detour around a tree that was down on Route 272 at Spruce Grove Road. When they got to
the bridge on Camp Road where it crosses the McCreary Run, the first unit attempted to cross the bridge. The trailer
tandems hit the guard rail. The driver then backed up and attempted to cross the bridge again. This time the truck’s
driver side steps struck the guard rail, causing damage to the fuel tank and tore the truck’s fuel tank off of the frame.
The step and fuel tank became wedged in the guard rail.

The truck had leaked fuel onto the ground. First Call Environmental was onscene and had spread absorbents on the
leaking fuel. They were discussing how they were going to pump the fuel tanks. At this point, our operators returned to
our equipment to get a saw and begin clearing the low trees to allow access to the tractor trailer from the Lloyds Road
side. Our equipment made access to the location where the tractor and trailers were. We stood by while First Call
Environmental tried using several different pumps to unsuccessfully pump the damaged fuel tank. Eventually, they were
able to remove the fuel from the tanks.

Once the fuel was removed, the heavy duty wrecker was used to lift the front end of the International tractor and move it
clear of the guard rail. The truck and trailer were then separated. The truck was moved off of the bridge and placed in a
pull off a short distance away from the bridge. The heavy duty wrecker then hooked to the front of the trailer. The trailer
was lifted over top of the guard rail and repositioned to a place that our tractor could hook to it to transport it off of the
bridge.

The second tractor trailer then attempted to cross the bridge.  This unit was not able to navigate across the bridge
either.  The trailer was disconnected from the truck and the heavy duty wrecker repeated the process of lifting the trailer
and repositioning it so that the tractor could reconnect.  Once the second unit was off of the bridge, the heavy duty
wrecker hooked to the damaged tractor and prepared to tow it to Elkton.

The damaged tractor and it’s trailer were both transported from the scene to companies terminal in Elkton MD.