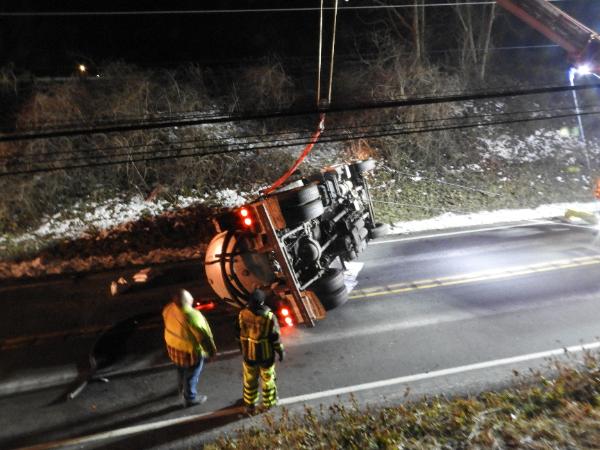 Contacted by the Pennsylvania State Police Avondale Barracks requesting us to respond to the area of 1338 Doe Run
Road in West Marlborough Township for an overturned tanker truck that was loaded with 1,500 gallons of vegetable oil
and was leaking.

Based upon the information we were given, we immediately dispatched a recovery supervisor, two of our specialized
heavy duty sliding rotator recovery units to the scene. Additionally, we contacted Null’s Recovery & Site Restoration to
respond to the scene to assist with the spill containment and clean-up.

Upon arrival, a Hino tanker truck was found to have been travelling northbound on Doe Run Road when it reportedly
lost  control and left the roadway, it was reported that the driver over corrected, the truck slammed into the
embankment  and overturned. The truck then slide on its side before coming to rest laying crossways blocking the entire
roadway. The truck was currently leaking its contents of vegetable oil onto the roadway. The fire department had the
leak contained to  the roadway. It was determined that once the truck was upright, that the leak would stop.

The fire department had fire police in place both north of and south of the accident scene to stop traffic from flowing into
the work area.

Null’s Recovery & Site Restoration arrived and went to work taking precaution if the tank was to rupture during the
upright and to further continue to contain the spill to the roadway. Due to the truck completely blocking the roadway, one
of the heavy duty sliding rotator recovery units was re-routed to enter the scene from the south side and back in to the
scene from Apple Grove Road. The other heavy duty sliding rotator recovery unit backed into the scene from the Wilson
Road end of the scene.

All of the rigging was then tensioned and checked from proper connections.

The two rotator operators then worked together to lift the tanker truck back to an upright position and slowly lower it
back onto it’s wheels.

Once the tanker truck was uprighted, it was immediately inspected for any leaks. The leaks had appeared to of all
stopped at that point.

The rigging was removed from the truck. All of the rigging was loaded into the supervisors truck to be transported from
the scene back to our facility to be pressure washed of the oil.

The rotator on the south side was returned to travel position. The rotator on the north side, rigged to the front end of
the truck to lift it and rotate it back parallel with the roadway so that it could be hooked to in order to be towed from the
scene. That rotator was then returned to travel position, it then hooked to the front of the truck and prepared to tow it
from the scene. Wireless towlights and secondary attachments were installed. The brakes were caged and the loose
truck parts were secured.

We then assisted NR&SR with cleaning up the roadway of the spilled oil and truck parts. Once the roadway was
cleaned,  the fire department was advised that they could re-open the roadway.

All of our equipment cleared the scene. The damaged truck was towed from the accident scene to Null’s of Cochranville.
Once at our facility, the truck was placed in our secure storage yard. The truck was unhooked from. The batteries were
disconnected.

The oil covered rigging was unloaded from the supervisor’s truck and pressure washed. Once the rigging was washed, it
was inspected, hung to dry, and once dry returned to it’s respective location.

All of our equipment was made ready for the next call.

A HUGE THANK YOU TO THE PO-MAR-LIN AND AVONDALE FIRE
COMPANIES FOR THEIR HELP ONSCENE AND WITH TRAFFIC
CONTROL!  AS ALWAYS, IT IS GREATLY APPRECIATED.