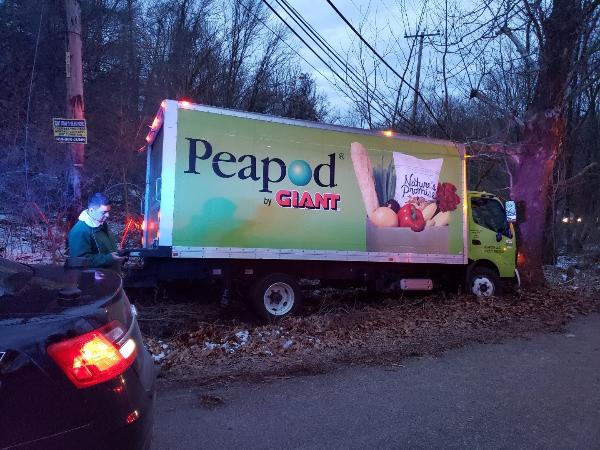 Contacted by Gazzerro’s Towing to respond to Route 82 and Manor Road in Valley Township for a Hino box truck that
was loaded and off the roadway and had struck a tree after colliding with another vehicle. We were advised that they
were onscene with a medium duty truck and needed assistance with recovering the truck and towing it from the scene.

Based upon the information we were given and photos sent from the scene, one of our sliding rotator recovery units was
dispatched to the scene.

Upon arrival, the Hino box truck was found to have been involved in a collision with a Jeep, left the roadway and struck
the tree head on. The box truck suffered major damage. The cab was pushed back. The driver’s door was broken open
and would not close. The truck was reported to be approximately 2/3 full of groceries.

We were advised that the company had a truck enroute to the scene to transfer the load from the damaged truck. They
were advised to have the truck respond to the Marriott Hotel at 600 Manor Road, Coatesville so that the load could be
transferred off the roadway once the truck was recovered.

Gazzerro’s crew worked to clean the dirt off the roadway and pick up the truck parts from the scene.

Once the truck was dropped in the storage yard, the rigging that was used was inspected and returned to its respective
location. The rotator was made ready for the next call.