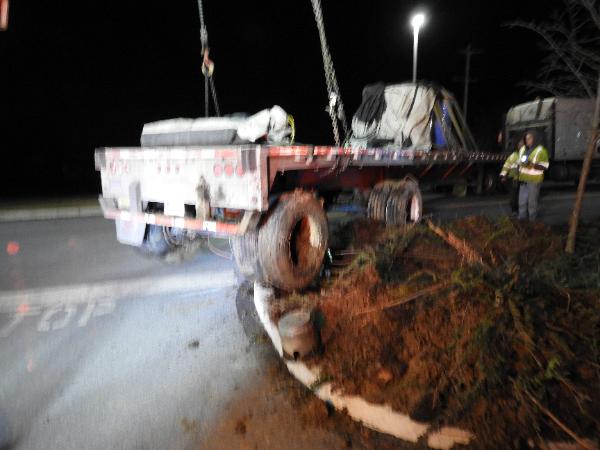 Contacted to respond to Lincoln Highway and Octorara Trail for a loaded tractor trailer that was stuck.  Based upon the
information that was given to us by the customer, truck S14 was dispatched to the scene.

Upon arrival, S14 found that the loaded tractor trailer was completely blocking the Lincoln Highway entrance/exit to the
CVS store.  The township police department was onscene doing an accident report due to the damage that was caused
by the tractor trailer.

The trailer axles became stuck in the flower bed which was inside a curb.  The trailer had sunk to the point that two of
the brake chambers were hitting the concrete curb causing damage to them.  The trailer had also struck the
underground sprinkler system along with an underground electric box.  It was determined that to avoid causing
additional damage to the underground systems and the trailer, that it would need to be lifted straight up out of the hole.
It was also found that the chains holding the two steel coils on the trailer were loose.  The driver was requested to
re-secure the load so that it did not shift any further.

At that point, truck R5 and a service truck were dispatched to the scene.

S14 connected rigging to the trailer so that when R5 arrived, the trailer could be lifted and set back onto the blacktop.

R5 arrived and was set-up on a work platform.  The winch lines were connected to the rigging and the trailer was lifted
up out of the holes.  The trailer was then rotated and set onto the blacktop.  The rigging was removed, inspected, and
returned to its respective location.  The rotator was returned to travel position.

The service truck began making temporary repairs so that the damaged trailer could be transported back to our facility
for the customer to make a determination on the plan of actions for the cargo to be delivered and the trailer to be
repaired.  The area was cautioned taped off due to the underground systems being exposed and the large holes.