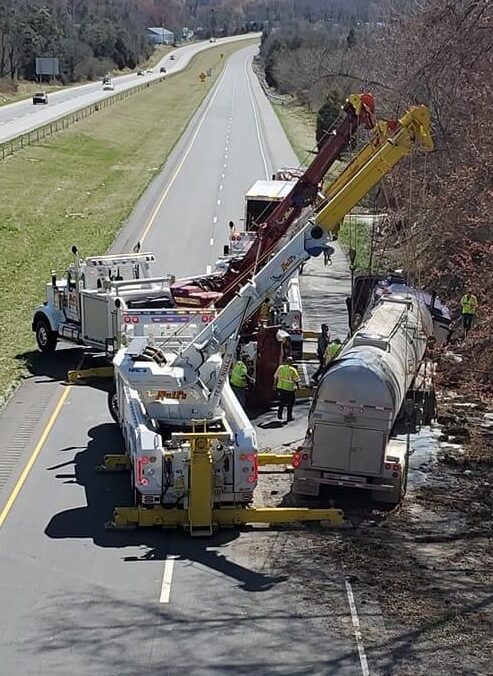 Contacted to respond to the Route 1 Bypass Southbound south of the Route 272 interchange in the area of the Park Road overpass for a commercial motor vehicle accident. We were advised that it was a tractor trailer tanker truck loaded with milk that was overturned and leaking. There were reports that the driver was trapped in the truck.

We dispatched our heavy recovery team to the scene and contacted Null’s Recovery & Site Restoration (NR&SR) to respond to the scene for the spill.

Upon arrival, an International four axle tractor pulling a stainless wrapped food grade tanker loaded with milk was found to have left the roadway after a reported mechanical failure. The truck struck the guard rail, went up the embankment, and overturned onto it’s driver’s side with the roof facing the roadway.

The truck and trailer both suffered major damage from the collision. The unit was laying with the wheels against the embankment which would prevent it from being able to be uprighted where it was laying.

Null’s Recovery & Site Restoration worked with the fire department and county hazmat to contain the spill. The fuel and milk had entered the waterway and were actively flowing downstream towards a large pond. It was decided that a pit needed to be dug as quickly as possible to reduce the impact of the spill. Milk was starting to enter the pond. NR&SR’s excavator was used to dig a large pit in the creek to catch the milk before any additional milk entered the pond that was situated on the Notthingham Park Property, which is owned by the County of Chester.

Two of our heavy duty sliding rotators worked to connect rigging to the loaded trailer to begin lifting the loaded unit and bring it back onto the roadway to a position that it could be uprighted without causing any further environmental impact. The third heavy duty sliding rotator rigged to the front of the tractor to lift it and work with the two rotators on the trailer. The rotator at the back of the trailer was able to get enough lift and roll motion on the trailer to get the leak to stop, thus reducing the environmental impact. The three trucks worked together to lift the unit up out of the waterway and bring it towards the road. Once closer to the road, the three trucks worked together to upright the unit back to its wheels. Once upright, the truck was set beside the rotators on the shoulder of the roadway. The rigging was removed and loaded for transport from the scene to be cleaned.

One of the rotators hooked to the front of the unit and pulled it forwarded out of the mud so that a full level one inspection could be performed by PSP.

At this point, a lane closure was set-up by NR&SR to allow a single lane of traffic to flow through the scene while the investigation continued and clean up work began.

Once the inspection was complete, the truck and trailer were separated. Our tractor hooked to the trailer. The damaged tractor and trailer were both transported from the accident scene to Null’s of Cochranville.

Null’s crews remained on scene throughout the evening and into the following morning working with crews from Ecotech to pump the milk out of the pit that was dug. The milk was hauled off site for disposal.

The final Null’s unit cleared at approximately 0100 on March 27. With a follow-up site visit taking place at 0800.