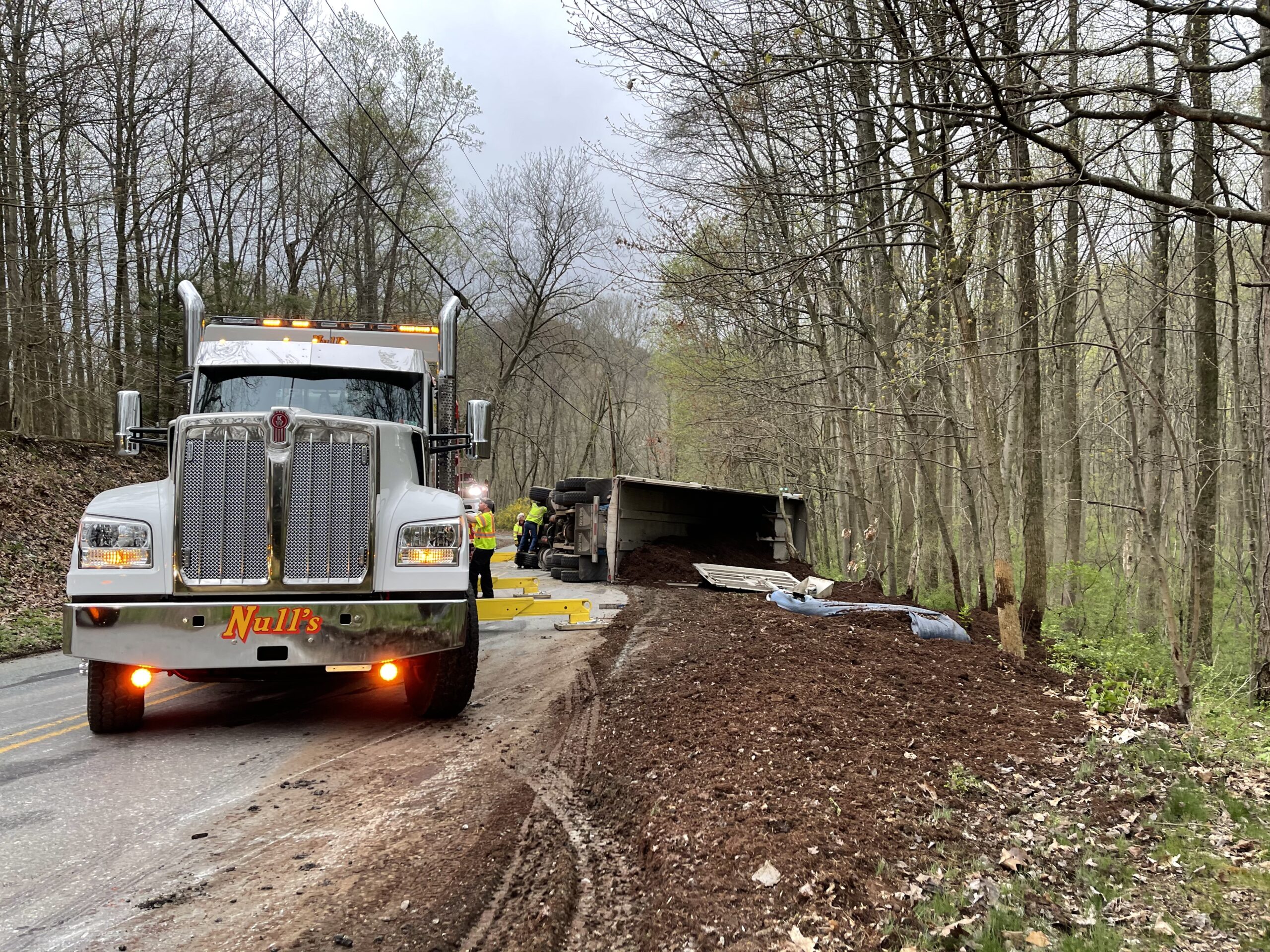 Contacted to respond to Harmony Ridge Road in the area of Ford Lane in Drumore Township for a dump truck that was overturned and had spilled it’s load on the roadway.

Based upon the information we were given, we immedialty dispatched two of our heavy duty sliding rotator recovery units, our skid steer loader, and contacted Null’s Recovery & Site Restoration to respond with their incident response unit and a trailer to transport the dump truck’s load from the scene.

Upon arrival, the International dump truck was found to have been travelling down a long steep hill with several sharp curves when it overturned onto the passenger side of the truck. The truck’s load was spilled. The truck was leaking fluids from the engine compartment and hydraulic system. The truck was approximately half way down the steep hill on a sharp turn. The truck slid off the roadway, it’s cab protector struck a tree while the truck was still sliding, causing the body to be pulled away from the frame into the raised position. The truck was laying under overhead utility lines which would pose a major obstacle to the recovery process.

NR&SR went to work on the spill. Our crew worked on rigging the truck for the recovery. Extreme care had to be taken during the recovery process due to the severity of the incline that our crews were working on. Both of the rotators were set-up on work platforms. The rotator at the rear of the truck lifted it so that rigging could be placed under the bed. The truck was then rotated out from under the overhead lines to a position that it could be uprighted. The rotator at the front of the truck placed rigging under the bed and began to winch the body back to the lowered position. The truck had approximately 1/2 of the cargo still on board.

Once the body was returned to the lowered position, the two rotators worked together to bring the truck back to an upright position and slowly lower it to it’s wheels. Once the truck was on it’s wheels, all of the rigging was removed, inspected, and returned to it’s respective location. The rotators were returned to travel position. The rotator at the rear of the dump truck then hooked to the rear of the dump truck to tow it from the scene.

The load that was still in the truck was all on the passenger side, causing the truck to severely lean. Our crew, along with NR&SR, worked to re-level the load so that the truck could safely be towed from the scene. We assisted NR&SR with cleaning up the fluids and debris from the roadway. The cargo was also cleaned up from the roadway.

The severely damaged dump truck was transported from the accident scene to Null’s of Cochranville where it was placed in our secure storage yard to await a DOT inspection.