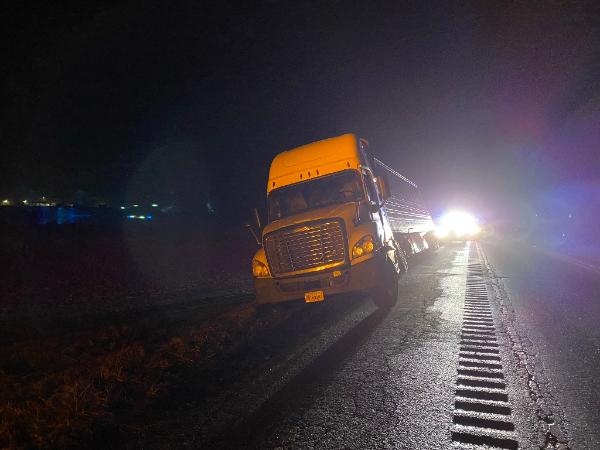 Contacted to respond to Route 41 between Highland Road and Ridgeview Dr in West Fallowfield Township for a loaded tractor trailer that was in a ditch.  The driver advised that the unit was loaded and in the ditch, he stated that the driver’s side wheels were off the ground on the trailer and that it was close to rolling over.

Based upon the information we were given, two of our heavy duty sliding rotator recovery units were dispatched to the scene.  Upon arrival, the unit was found to be off the roadway as the driver described.  The unit was extremely unstable and in danger of overturning.  It was determined that the loaded trailer would need to be held upright while the unit was winched forward out of the ditch.  It was also determined in order to do that, that the roadway would need to be shut down.

An additional heavy duty wrecker was dispatched to the scene, along with traffic control.

One of the rotators immediately rigged a line to the front of the trailer to prevent the unit from overturning while our team worked to place rigging on the truck and trailer to recover them.

The unit was successfully recovered with no visible damage to the truck or trailer.

Once on the roadway, the unit was transported from the scene to Null’s of Cochranville.