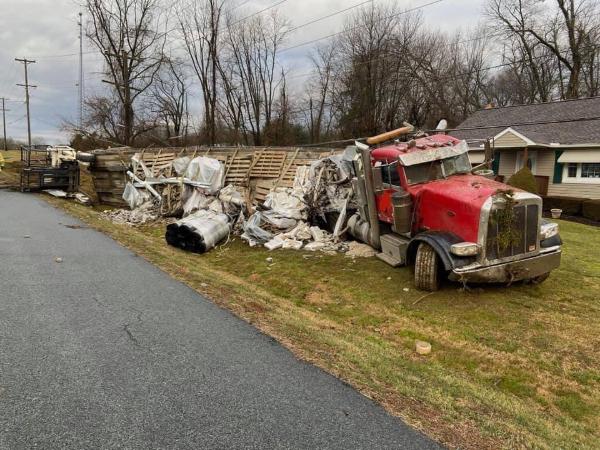 Contacted to respond to Route 273 between Sylmar Road and Wilson Road in Rising Sun Maryland for a loaded tractor and
trailer that was overturned.  We were advised that it was pulling a flatbed trailer that was loaded with stone, Sakrete, and a
moffett style forklift.  Based upon the information we were given, we immediately dispatched one of our heavy duty sliding
rotator recovery units and our Landoll trailer.  We also contacted Null’s Recovery & Site Restoration to respond with one of
their roll-off dumpster trailers, their Incident Response Unit, and their service truck.

Upon arrival, a Peterbilt pulling a spread axle flatbed trailer loaded with stone and hauling a moffett style forklift were found to
have been travelling on 273 from Rising Sun towards Calvert when it was involved in a collision with a Ford work van.  The
tractor trailer left the roadway and struck an embankment.

The unit came to rest in a partially jack-knifed position with the tractor twisted but still upright, the trailer was severly twisted
and overturned.  The cargo was mostly thrown off of the trailer, however some of the cargo was still attached to the trailer.
The moffett forklift was knocked loose from the trailer.

The rotator then repositioned and set-up to lift the tractor out of the ditch.  The tractor was lifted and set back onto the
roadway so that our rotator could hook to it in order to tow it from the scene.

Our team worked with NR&SR along with Frank’s team to pick up the cargo from the scene.

The rotator towed the damaged tractor from the accident scene to Frank’s facility where it was placed in their storage area.