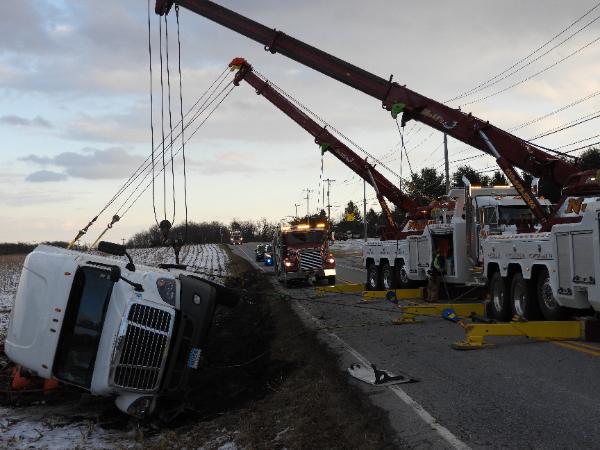 Contacted by Gazzerro’s Towing requesting us to respond to Airport Road between Lincoln Highway and the Route 30
bypass to assist them with an overturned tractor trailer.  They advised that it was loaded and that it was reported to
have a fuel leak.

Based upon the information we were given, we immediately dispatched a recovery supervisor, trucks R5, R6, 90, and
contacted Null’s Recovery & Site Restoration to respond to the scene.

Upon arrival of Gazzerro’s crew, they sent photos to our office. Based upon the additional information gathered and the
photos from the scene, our air cushion recovery unit was dispatched to the scene as well.

Upon arrival, our recovery supervisor performed a scene survey.

A Freightliner tractor pulling a van trailer that was reported to be loaded with beer was found to have been travelling
north on Airport Road from Lincoln Highway, when for unknown reasons, the unit left the right side of the roadway.
There was a drop off approximately 3′ down, at the edge of the roadway where the unit left the roadway. The unit
struck several bollards which were marking the underground pipeline that crossed under the roadway at that point. The
truck had a fuel leak, which Null’s Recovery & Site Restoration quickly addressed. The truck had damage to the front
end and the windshield, however, the damage appeared to be minimal. It was noted that the air bags for the cab were
knocked off of their bases. The trailer’s roof was bulged out along with the side wall. There did not appear to be any
significant damage to the unit.

It was determined that due to the minimal amount of damage to the truck and trailer, along with the sensitivity of the
cargo that we would attempt to upright the unit loaded. This would be a time consuming and tedious task to ensure that
the unit was not damaged any further and to ensure everyone’s safety working in the treacherous environment.

Once fire police arrived on location and closed the roadway, our equipment was moved into position. The two rotators
were positioned on the roadway and set-up on work platforms. Their booms were extended and rotated counter
clockwise. Rigging was connected to the steering axle and front drive axle of the tractor, the axles were chained to the
truck’s frame. Rigging was connected to the rear axle on the trailer tandems and the axle chained in place. The two
rotators “spiked’ the truck and trailer in place to prevent it from sliding as crews worked to place the air cushions under
the trailer. While this was being done, crew members readied the air cushions by carrying them down the embankment
and into the field. The air cushion compressor and valve system was also carried into the field.

The driveline was removed from the tractor. One of our personnel entered the cab to set the parking brakes on both the
truck and trailer. Additionally, at the driver’s request, he removed belongings of the driver. The batteries were
disconnected on the truck.

A strap was rigged around the rear door frame and roof on the trailer. This strap was connected to one of the main
boom winch lines on the rotator at the rear of the unit.

A chain was rigged to the trailer’s fifth wheel plate and was then connected to one of the main boom winch lines on the
rotator at the front of the unit.

Truck C27 was dispatched to the scene to assist with recovering the unit back onto the roadway once it was uprighted.

Once on it’s wheels, the rotators had to keep ahold of the unit and hold it upright as the load was shifted to the
passenger side and the steep incline was causing the unit to severely lean.  C27 was onscene at this point and
positioned at the front of the tractor trailer unit.

Crew members starting deflating the air cushions and carrying them back up out of the field to the roadway and loaded
them on C27 for transport from the scene to be cleaned.

The rigging was then removed and both rotators returned to travel position.

We then hooked to the front of the truck and prepared to move the unit to the center of the roadway so that the truck
and trailer could be separated.

The truck and trailer were then transported from the accident scene to Null’s of Cochranville.

Once at our facility, the truck and trailer were placed in our secure storage yard. The air cushion recovery system was
unloaded inside our shop. The air cushions were all inflated so that they could be washed. Several of our crew members
worked to wash the mud off of all of the equipment that was used. The straps and rigging were pressure washed. The
air cushions were washed by hand. All of the rigging and cushions used were left in the shop  overnight to allow them to
dry.

THANK YOU TO THE TEAM AT GAZZERRO’S TOWING FOR THE CALL AND THE HELP,
IT WAS PLEASURE WORKING WITH THEM.

ALSO A HUGE THANK YOU TO THE VALLEY TOWNSHIP POLICE DEPARTMENT, THE
WESTWOOD, WAGONTOWN, AND SADSBURYVILLE FIRE COMPANIES FOR THEIR
HELP WITH TRAFFIC CONTROL!  AS ALWAYS, IT MAKES OUR JOB MUCH SAFER AND
WE GREATLY APPRECIATE IT!