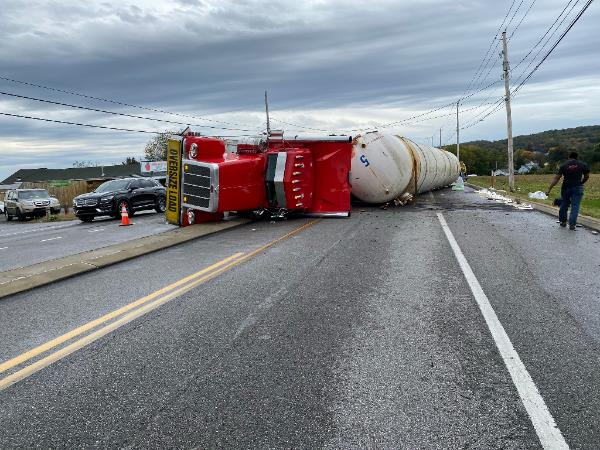 Contacted by two of our customers, both requesting us to respond to Route 30 in the area of Newport Road in Salisbury Township for an oversized load that was involved in an accident.  We
were advised that it was a four axle Peterbilt tractor pulling a three axle extendable step-deck trailer hauling a 82,000 pound tank that was empty that had overturned.  We were requested to
respond to clean up the accident scene.  We were advised that company reps were enroute to the scene as well.

One of our recovery supervisors arrived onscene moments later.  We learned that there was a large fluid spill from the truck’s fuel and hydraulic tank.

Based upon the information we were given, we dispatched three of our heavy duty sliding rotator recovery units and our tri-axle tractor to repower the trailer.  We also contacted Null’s Recovery
& Site Restoration to respond due to the spill.

Once our equipment arrived onscene we were immediately requested to work to contain and control the fuel spill.  This task was assigned to NR&SR who were later assisted by Lancaster County
HazMat personnel.

We were given the go ahead to begin the recovery.  One of the company reps advised that they were possibly bringing a crane to the scene, we were advised to upright the truck and trailer.
Once that was complete we would regroup and decide if the crane was going to lift the tank or if our rotators would be utilized to lift the tank.

The tank was still secured to the trailer, the trailer was being supported off the ground partially by the tank.  It was decided due to the unknown stability of the tank that the truck and trailer would
be separated prior to the trailer being disconnected from the tank.

The crane had arrived on location, their operators advised that they would be able to position far enough away from the wires.

The fluid spill was cleaned up as much as possible however further clean-up needed to take place once the tank was lifted requiring part of our team along with NR&SR to remain onscene.

One of the rotators then towed the tractor from the scene to Null’s of Cochranville.

The crane had an extended set-up time due to it’s size.  The crane then lifted the tank and set it onto an awaiting trailer.  The crane then had an extended tear down time.  Once the crane was
clear, the roadway was able to be cleaned up of the remaining fluids.  The damaged cribbing that had the been on the trailer under the tank was loaded for transport from the scene.  All of the
straps, chains, etc. were loaded into NR&SR’s service truck for transport from the scene.

The trailer was transported from the accident scene to Null’s of Cochranville.

Once the clean-up and road repairs were complete our remaining equipment cleared the scene.

A HUGE THANK YOU TO GAP, KINZER, AND CHRISTIANA FIRE COMPANIES FOR THEIR HELP WITH TRAFFIC CONTROL AND SCENE SAFETY!  AS ALWAYS, IT
IS GREATLY APPRECIATED!