Brake failure leads to tractor trailer into the Visitor’s Center at Longwood Gardens. 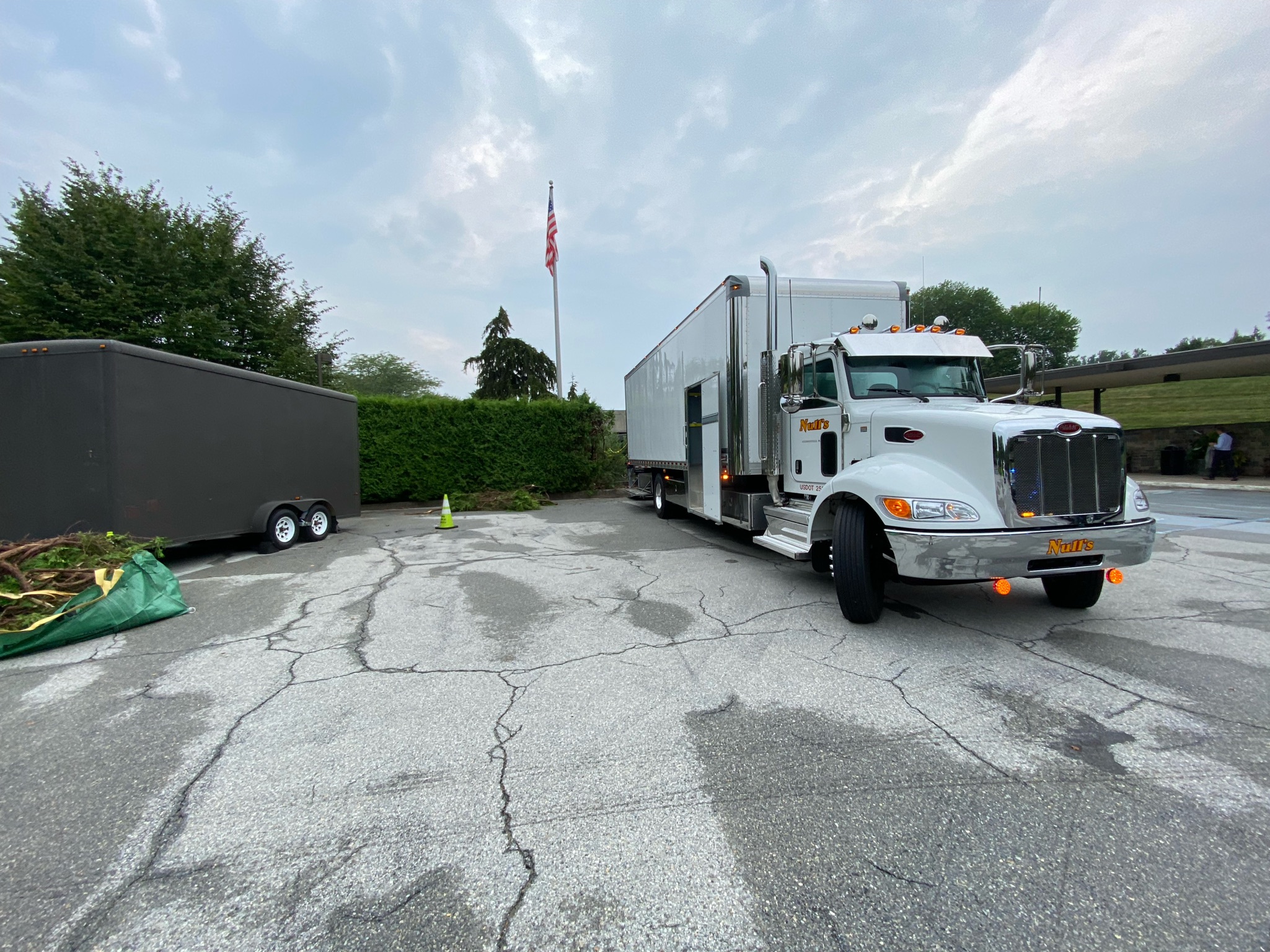 Based upon the information we were given, a recovery supervisor, two of our heavy duty sliding rotator recovery units, and one of our truck tractors were dispatched to the scene. We also contacted Null’s Recovery & Site Restoration and requested that they dispatch one of their incident response units to the scene.

Upon arrival, we were advised that the truck suffered a brake failure on Route 1 nearly one mile away from the accident site causing it to loose it’s brakes. The operator of the vehicle attempted to avoid causing a collision by taking the exit ramp for Longwood Gardens which ultimately lead to the visitors center. Unable to stop the unit, it travelled through an approximate 20’ high row of trees that were creating a buffer between the visitors center and the parking lot, once through the trees, the unit struck several decorative curbs, damaging them. The unit traveled through the patio area in front of the welcome center and then struck the structure. The tractor portion penetrated the wall and came to rest inside the building. The front of the trailer was in under the roof of the building. The truck’s roof was ripped off and on top of the structure’s roof. The front of the trailer suffered significant damage from the impact.

We were advised that the Chester County Rescue Task Force was enroute along with a building engineer to assess the structural integrity of the area of the building that was damaged from the impact. Longwood Gardens personnel were onsite and were working hand in hand with the other first responders onscene to mitigate the incident.

After a thorough evaluation of the situation was performed by all parties involved, it was determined that part of the structures roof would need to be cut away to allow the unit to be removed from inside the building. Fire Department personnel, along with Null’s personnel worked to make multiple cuts through various types of building materials to remove the structural components that would hinder the recovery. While this was being done NR&SR also worked to drill and pump the fuel tanks on the tractor.

Once a suitable part of the structure was removed from around the truck, it was determined that it was safe to begin recovering the unit from the precarious location it was in. As the truck was being recovered out of the building all personnel maintained close communications to ensure that no further structural damage was occurring and that no signs of collapse were present.

Once clear of the building, the truck and trailer were separated. One of the rotators lifted the front of the trailer and brought the entire trailer back into the parking lot, where our tractor was then hooked to the trailer and prepared to tow it from the scene. The rotators then worked together to lift the severely damaged tractor off of the patio area and into the parking lot so that it could be towed from the scene. One of the drive axle wheels and tires was moved to the steer axle so that the truck could be towed from the rear as the driveline was located up.

The rotators were returned to travel position. Once all of our equipment was picked up and both the truck and trailer ready for transport from the scene, we assisted NR&SR with cleaning up the scene. Once this was completed, the truck and trailer were towed from the accident scene to Null’s of Cochranville where they were placed in our secure storage yard.

A HUGE THANK YOU TO THE LONGWOOD FIRE COMPANY, LONGWOOD GARDENS, CHESTER COUNTY RESCUE TASK FORCE, AND PA STATE POLICE AVONDALE BARRACKS FOR ALL OF THEIR ASSISTANCE ONSCENE!