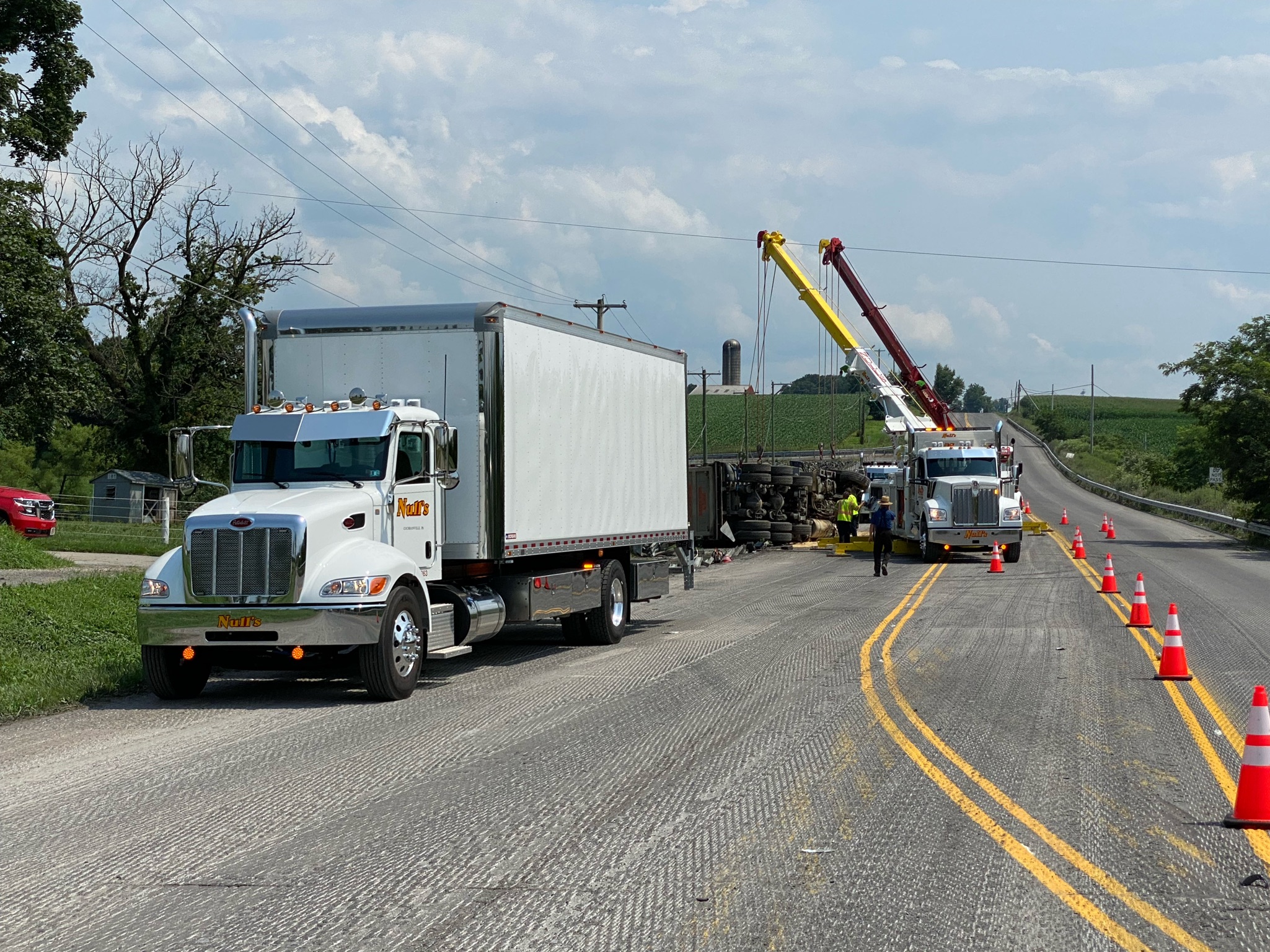 Contacted to respond to Route 41 and Friendship Church Road in West Fallowfield Township for a serious motor vehicle accident involving a fully loaded dump truck and a sedan with a major fluid spill.

Based upon the information we were given, two of our heavy duty sliding rotator recovery units along with Null’s Recovery & Site Restoration were dispatched to the scene.

Upon arrival, it was found that the sedan and the dump truck were involved in a collision. After the collision the southbound dump truck crossed the turn lane and the northbound lane, overturned onto it’s driver side, struck the guard rail taking out multiple sections of guard rail and multiple guard rail posts. The truck was leaking diesel fuel, engine oil, coolant, hydraulic fluid and DEF. The truck’s front axle was torn loose. The truck suffered major damage.

The truck was startling the guard rail posts, which would require it to be lifted clear of the posts prior to being uprighted to avoid damaging the tires and making it not towable. The truck still had approximately 1/3 of the load of stone on board. The remainder of the load was spilled behind the guard rail and in the farm meadow next to the scene.

NR&SR worked to contain the spill and pump the leaking diesel tank to stop the leak. They also worked to set-up traffic control at the scene. NR&SR utilized their cut off saws to cut the guard rail and move it clear of the truck.

Once given the go ahead by PSP to begin the recovery, the two rotators were moved into position and set-up on a work platform. Rigging was connected to the dump truck to lift the bed, cargo, and chassis back to it’s wheels. The truck was lifted straight off of the ground and rotated to a position that once it was upright, it would not be on top of the guard rail posts. The two rotators then worked together to upright the truck and set it back onto the roadway.

Once the truck was upright, the rigging was removed, inspected, and returned to it’s respective location. The two rotators were returned to travel position. One of the rotators was used to hook to the front of the truck and prepare to tow it from the scene. Once hooked up PSP performed a Level one DOT inspection on the truck with the assistance of our operator and NR&SR’s service truck.

The truck parts and damaged guard rail was loaded onto one of our rollbacks for transport from the scene. Our skid steer loader worked to clean-up the stone from the shoulder of the roadway so that it would not effect the safety of passing motorists once the roadway was re-opened.

Once the roadway was cleared NR&SR was given the go ahead to pick-up their traffic control equipment and fire police units were advised that they could completely re-open the roadway. The dump truck was towed from the accident scene to Null’s of Cochranville where it was placed in our secure storage yard.

A HUGE THANK YOU TO THE VOLUNTEER FIRE POLICE UNITS THAT HANDLED THE ROAD CLOSURE, REDUCING THE TRAFFIC TO ONLY THOSE NEEDED TO ACCESS THE LOCAL BUSINESSES.