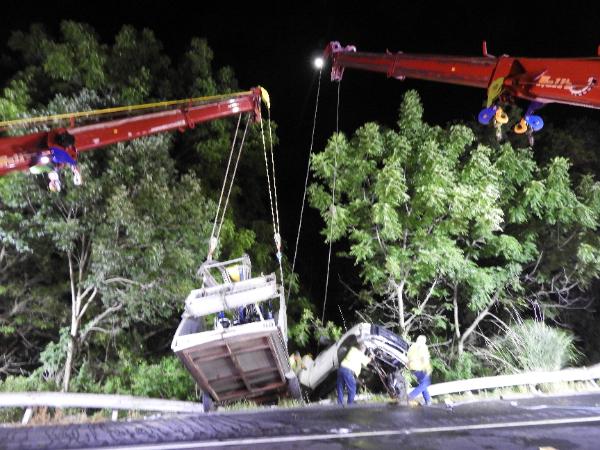 Contacted by the Pennsylvania State Police Avondale Barracks requesting us to respond to the Route 1 Bypass
southbound, south of Route 796 in Penn Township for a vehicle accident involving an “F-450 pick-up truck that was
pulling a large carnival ride, that was over the embankment and overturned”.  Based upon the information we were
given, one of our heavy duty sliding rotator recovery units and a medium duty rollback were dispatched to the scene.

Upon arrival, an F-450 dual rear wheel service truck was found to be pulling a “Hampton Umbrella Ride” southbound on
the bypass when for unknown reasons, it lost control.  The truck and trailer jack-knifed and slammed through the guard
rail.  The fire department was just clearing from extricating the driver of the truck when we arrived.  The guardrail was
lodged between the axles on the trailer along with the front axle and cab of the truck.  The truck’s passenger side back
duals were wedged on top of the front of the trailer.  There were several motorcycles that had broken loose from the
impact.  One of the motorcycles was laying over the embankment.  The front of the trailer and back of the truck were
into the bottom of the steep embankment.  The wooded area at the bottom of the embankment was heavily vegetated
with poison ivy.  There were tools and other cargo items that came out of the service truck that were at the bottom of the
embankment as well.

It was noted that the truck had suffered major front end damage and frame damage.  It was also noted that the trailer
suffered significant damage as well and would not be able to be towed from the scene.

At this point, a second of our heavy duty sliding rotator recovery units and our lowboy trailer were dispatched to the
scene.  Null’s Recovery & Site Restoration was also contacted to respond to the scene to handle the clean up of the
engine fluids that had leaked from the vehicle on to the roadway and the embankment, as well as to assist with removing
the guard rail as needed.  The second rotator was advised to respond northbound in the southbound lanes from the
Route 896 interchange.

Two of our portable light towers were set-up to provide a safe work area as crews worked to clean the fluids, vehicle
parts, and vehicles from the scene.

One of the heavy duty sliding rotator recovery units was positioned in the southbound slow travel lane.  This rotator was
set-up on a work platform.  The boom was extended and rigging connected to the trailer.  The rigging was tensioned.

With the trailer now stabilized, our crew was able to better asses the situation.  It was determined that the truck and
trailer’s connection was compromised to the point that they would not be able to be disconnected in the position they
were in.

With the guard rail not longer lodged, the two rotators and the rollback worked to bring the truck and trailer back up over
the embankment and onto the roadway.  Once on the roadway, the three worked together to un-jackknife the truck and
trailer.  The second rotator re-rigged to the back of the truck in order to lift the rear axle and take the pressure off of the
unit’s hitch.  The truck and trailer were successfully un-jackknifed.  The unit was then separated.

The rollback worked to load the service truck and secure it for transport.

The lowboy trailer had to back off of the bypass due to a low clearance bridge just south of the accident scene.  Once
off the bypass, the truck and trailer were transported to Null’s of Cochranville where they were both unloaded in our
secure storage yard.

A HUGE THANK YOU THE WEST GROVE FIRE COMPANY AND THE PENNSYLVANIA STATE
POLICE AVONDALE BARRACKS FOR THEIR HELP WITH TRAFFIC CONTROL DURING THIS
INCIDENT.  AS ALWAYS, IT IS GREATLY APPRECIATED!