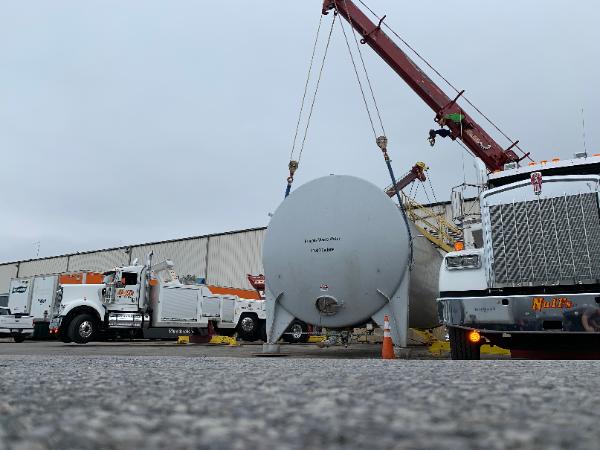 Contacted in early July by one of our customers regarding them needing a tank lifted and repositioned in Oxford at a later
date. One of our lead operators met with personnel onsite to discuss the project. It was determined that we would be able to
handle the move without issue. Arrangements would be made to have all piping, electric, and stairways removed prior to our
arrival onsite to perform the lift. We were advised that the tank was approximately 47,000 pounds. The tank measured 49′
long and 13′ wide at the bases.

Trucks R5 and R6 arrived onsite and met with personnel from all parties involved with the move.  There was a full dumpster in
front of the tank, which was supposed to have been removed from the site prior to our arrival. R6 was used to relocate the
dumpster so the tank could be moved with out delay.  R5 and R6 were then set-up to lift and move the tank.

The tank was still in line with the stairs and would need to be moved clear of the stairs prior to being lifted. Additionally, the
tank still had a small amount of liquid. We were requested to lift the one end of the tank so that the remaining liquid could be
pumped off for a valve replacement to be performed once the tank was repositioned.

Straps were placed around the tank, R5 and R6 worked to lift the tank so that it could be pumped, moved clear of the stairs,
and then repositioned.

R5 and R6 repositioned the tank by spinning it 90 degrees so that it was now perpendicular to the building. The tank was set
into the desired position at the direction of company personnel onsite. Once in place, the rigging was removed, inspected, and
returned to it’s respective location. The wreckers were returned to travel position and moved from the immediate area. Our
personnel then assisted with relocating the stairs to the new location.