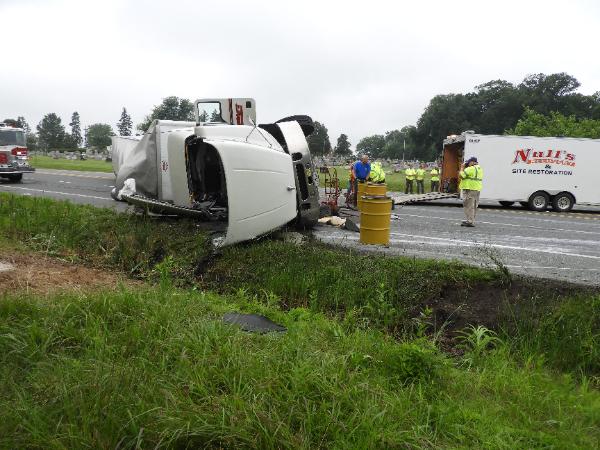 Contacted by Frank’s Autobody & Sales requesting us to respond to Route 272 and Route 273 in the Calvert section of Cecil
County Maryland to assist them on an overturned tractor trailer loaded with beer.  Reports from the scene were that it was
loaded with kegs of beer and that the kegs had broken the roof, which would require the trailer to be off-loaded prior to being
uprighted.

They requested that we respond to the scene with one of our rotator recovery units and a trailer to load the cargo into as it
was unloaded.  Null’s Recovery & Site Restoration (NR&SR) was also contacted as Cecil County HazMat was requiring that the
fuel tanks be pumped prior to the unit being uprighted.

Upon arrival, a Mack sleeper tractor pulling a 53’ dry van non refrigerated trailer that was loaded with kegs of Yuengling beer
was found to have been travelling southbound on Route 272 when it reportedly ran the red light at the Route 273
intersection.  The tractor trailer slammed into a car, causing the tractor trailer to lose control.  The tractor trailer overturned
onto it’s passenger side.  The unit continued to slide violently on it’s side, spinning nearly 180 degrees.  The unit came to rest
facing a northeastern direction and completely blocking Route 272.

Upon arrival of NR&SR, they immediately went to work to pump the diesel fuel tanks.  The tanks had to be drilled in order to
remove the fuel.  The fuel was pumped into barrels by NR&SR.  They also worked to spread absorbents on the fluids that had
leaked onto the roadway.  They used power brooms to sweep the roadway of the truck parts and debris that were littering the
roadway from the point of impact to where the tractor trailer came to rest.

Our crew along with Frank’s crew performed a scene survey.  The tractor was found to have damage to the steering axle and
rear drive axle.  The driver had been extricated by the fire department.  Part of the roof was cut off of the truck to free the
driver.  The trailer suffered major structural damage.  Several of the kegs of beer had broken through the roof.  The trailer
appeared to be loaded front to back, the kegs had been on pallets prior to the unit overturning.  It appeared some of the kegs
had been double stacked.

At this point, we dispatched a second trailer for loading the cargo into, as we would not be able to load the kegs into the
replacement trailer stacked as they were prior to the accident.  We also dispatched their lowboy trailer to load the tractor onto
as it was not towable.

Our crews along with Frank’s and NR&SR’s crews began the process of unloading the cargo.  Frank’s skid steer loader was
used to take the pressure off the trailer doors so they could be unlatched.  The skid loader was then used to lift the doors
open.  Personnel worked to upright the kegs one  y one and carry them out of the trailer.  Once out of the trailer, they were
placed onto pallets.  As a pallet became full, the skid steer loader would carry the pallet from the ground and set it into the
back of the replacement trailer.  Once the pallets were set into the replacement trailer, a pallet jack was used to move the
pallets to the front of the trailer.  This process took several hours and was very labor intensive.  Crews switched out and
rotated positions as the heat and humidity was taking its toll on everyone working the off-loaded.

While the off-load was taking place, our heavy duty sliding rotator recovery unit along with one of Frank’s heavy duty wrecker
operators worked to separate the truck and trailer.  The rotator was used to lift the front of the tractor which relieved the
pressure from the fifth wheel plate allowing it to be released.  The tractor was then winched front.  With the tractor now clear
of the of the trailer, the rotator rigged to upright  the tractor and carefully set it back onto it’s wheels.  The axles were chained
in place as they were severely damaged.

Frank’s heavy duty wrecker hooked to the front of the trailer and prepared to tow it from the accident scene to their facility.
Straps were placed over the damaged roof to hold it and the sidewalls in place.  Frank’s skid steer loader was loaded for back
onto their rollback to be transported back to their facility.  We assisted NR&SR with doing a final sweep of the roadway and
placing all of the absorbents into a salvage drum for transport from the scene.

Once the roadway was returned to pre accident conditions, all of the equipment cleared the scene.  The two trailers
containing the cargo were transported to our storage facility.  The damaged tractor and trailer were both transported to
Frank’s facility.  Once at Frank’s, the trailer was positioned in their storage area.  Frank’s heavy duty wrecker was used to
unload the damaged tractor off of our lowboy trailer and was placed in our storage area as well.  All of our equipment was
made ready for the next call and parked back in it’s respective location.