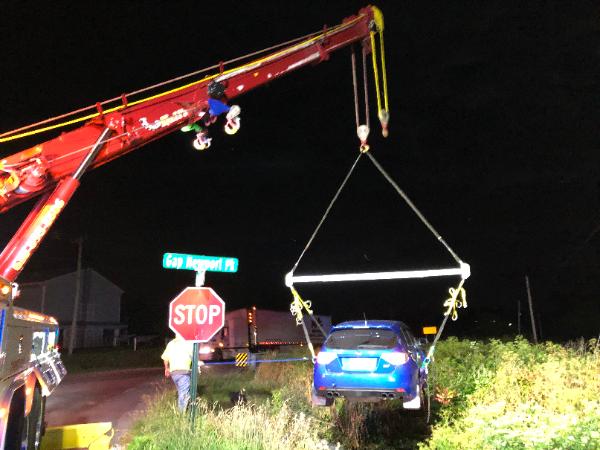 Contacted by PSP Avondale to respond to Route 41 and Fallowfield Road in West Fallowfield Township for a single
vehicle accident.  We were advised that the vehicle needed to be winched back onto the roadway.

One of our rollbacks was dispatched to the scene.

Upon arrival, a Subaru STI was found to have been travelling south on Fallowfield Road when it failed to properly
negotiate the turn at Route 41. The vehicle left the roadway, went airborne and came to rest in the water retention area
on the southwest corner of the intersection.  Our rollback operator surveyed the scene and noted that the vehicles oil
pan and gas tank was on top of several large rocks that were in the retention area.  It was also noted that the vehicle
suffered relatively minor damage.

At that point, our operator requested one of our long reach sliding rotator recovery units be dispatched to the scene to
be used to lift the vehicle straight up off of the rocks and back onto the roadway to prevent causing any environmental
damage and to avoid causing any further damage to the vehicle itself.

One of our portable light towers was set-up to provide a safe work environment for our personnel working onscene as
they descended into the retention area to rig the vehicle for the recovery.

The vehicle was secured via a four point tie down.

The vehicle parts were picked up from the accident scene.

The vehicle was transported from the accident scene to Null’s of Cochranville where it was unloaded in our secure
storage yard.