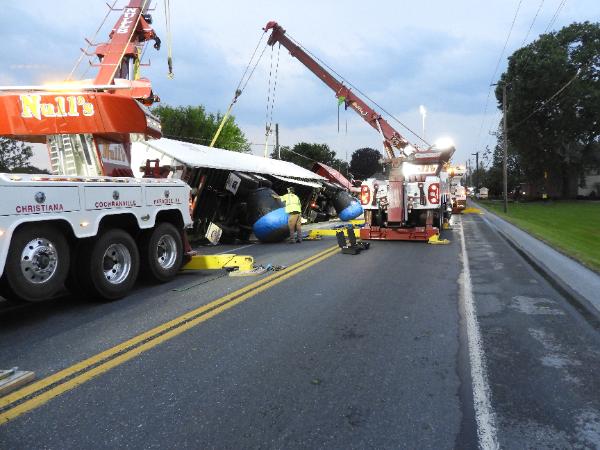 Contacted by the Pennsylvania State Police Lancaster Barracks requesting us to respond to the 2700 Block of Old
Philadelphia Pike in Leacock Township for a tractor trailer that was overturned as a result of a major weather event that
had moved through the area.  We were advised that the unit had a fuel leak.

Based upon the information we received, we immediately dispatched three of our heavy duty sliding rotator recovery
units to the scene.  We also contacted Null’s Recovery & Site Restoration to respond to the scene.

Upon arrival, a Kenworth tractor pulling a 53′ van trailer loaded with 20,000 pounds of food grade packaging was found
to have been traveling westbound on Old Philadelphia Pike when it was reportedly picked up off the roadway coming to
rest on it’s driver’s side off the roadway on the eastbound side of the roadway.  The unit struck a utility pole causing
damage to the tractor and trailer.  The unit came to rest under low wires which would prevent it from being able to be
uprighted where it was laying.

It was determined that the unit would be able to be uprighted loaded, however it would have to be brought out from
under the low wires prior to being uprighted.

One of the rotators set-up on a work platform at the back the unit, it was rigged to lift the rear end of the trailer.  The two
rotators worked together to lift and winch the unit out from under the wires to a position that it could be uprighted without
interfering with the wires.

While this was being done, the third rotator set-up on a work platform beside the trailer.  The driveshaft on the tractor
was removed for towing purposes.  During the initial rigging process, our dispatch received a call from trucking company
requesting that we do everything possible to save the load and prevent it from getting wet.

Three 12″ wide recovery straps were positioned under the trailer.  A line was rigged to the trailer tandems to “spike”
them to prevent the trailer from shifting while it was being lifted upright.  The two rotators that had been positioned at the
back and beside the trailer worked the three lifting straps and the “spike” line. The rotator at the front end of the unit
lifted the front end of the tractor and set it in a head forward position to minimize frame twisting during the uprighting
process.

Our operators donned our wireless headsets for constant onscene communications.

Once the truck and trailer were in proper position for uprighting, and all the rigging was in place, tensioned, and
checked for proper connections, the three rotators worked together to being lifting the unit to an upright position.

At this point, it was beginning to get dark.  Portable light towers were set-up onscene to  provide a safe work
environment for our personnel operating onscene.

As the loaded unit was being uprighted, landing cushions were put in place to prevent the unit from violently slamming to
the ground, which could potentially damage the truck, trailer, and cargo.

The loaded unit was carefully uprighted and lowered to it’s wheels.  Once upright, all of the rigging was removed.  The
rigging that needed to be washed was loaded for transport from the scene.  The remaining rigging was inspected and
returned to its respective location.  All three rotators were returned to travel position.  Once of the rotators hooked to
the tractor and prepared to tow it from the scene.  The truck and trailer were separated.

One of our tractors hooked to the trailer. The truck and trailer were both moved off of the landing cushions.  The landing
cushions were loaded for transport from the scene to be cleaned back at our facility.

The truck and trailer were moved off of the roadway so that they could be prepared to be towed back to our facility while
NR&SR worked to clean up the roadway.  Once the units were ready to be transported, they were transported from the
accident scene to Null’s of Cochranville, where they were placed in our secure storage yard.

The rigging that needed to be cleaned, was cleaned, inspected, and returned to its respective location.  All of our
equipment was made ready for the next call.

A HUGE THANK YOU TO THE HAND-IN-HAND FIRE COMPNAY OF BIRD-IN-HAND, PA
FOR ALL OF THEIR HELP WITH TRAFFIC CONTROL AND SCENE SAFETY ON THIS
INCIDENT.  AS ALWAYS, IT IS GREATLY APPRECIATED!