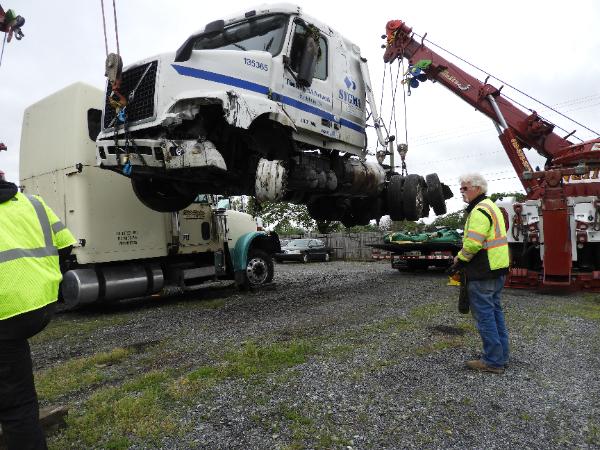 Contacted by the Pennsylvania State Police Avondale Barracks requesting us to respond to Gap Newport Pike between
Honeycroft Boulevard and Faggs Manor Road for a serious motor vehicle accident involving an SUV and an overturned
tractor trailer.  We were advised that they were making us aware of the incident and placing us on stand-by.

One of our recovery supervisors reported back that a Toyota Rav4 had been travelling southbound on Gap Newport
Pike when it crossed the center line of the roadway into the path of a northbound Volvo tractor pulling an empty reefer
trailer.  The impact caused major damage to both vehicles.  The Toyota continued south on Gap Newport Pike where it
came to rest on the westbound side of the roadway in a field near Faggs Manor Road.  The fire department had to
extricate the driver of the severely damaged Toyota.  The tractor trailer continued northbound through the guard rail on
the west side of the roadway and overturned onto the driver’s side.  The tractor trailer unit was down over the
embankment.  The tractor portion of the unit had damage to all three axles.  There was a fuel spill that  Null’s Recovery
& Site Restoration was onscene working to mitigate.

We spoke with the Troopers onscene who advised that they were working on their investigation.  They advised they had
their forensic team enroute to the scene to photograph the scene prior to any clean up or recovery work begriming.

Our supervisor reported back that the following equipment would be needed:
Two of our heavy duty sliding recovery units for the recovery of the tractor trailer unit.
One of our truck tractors to transport the trailer once it was upright.
Our Landoll trailer to transport the severely damaged tractor from the scene.
A rollback for the Toyota.

NR&SR had one of their Incident Response Units, a service truck, and street sweeper onscene.

At 0606, our supervisor onscene was advised that the investigation was wrapping up and we could begin to mobilize our
equipment.  At 0615, the scene was officially turned over to us to begin the clean up of the scene.

One of the rotators then repositioned and set back up on a work platform.  Rigging was connected to the tractor so that
it could be uprighted.  Once the tractor was upright, the two rotators worked together to lift it back up the embankment
and set it onto the roadway so that the driver and PSP could remove items from the truck for investigation purposes.
The tractor was then lifted and set onto our Landoll trailer.  The truck and trailer parts were loaded onto the Landoll
trailer as well.  The damaged tractor was secured for transport from the scene.  All of the loose truck parts were
secured  for transport as well.

Our thoughts and prayers are with everyone involved with this incident.

A huge thank you to the Cochranville, Avondale, Keystone Valley, and Sadsburyville Fire Police for
their help with traffic control during this incident, as always, it is greatly appreciated!