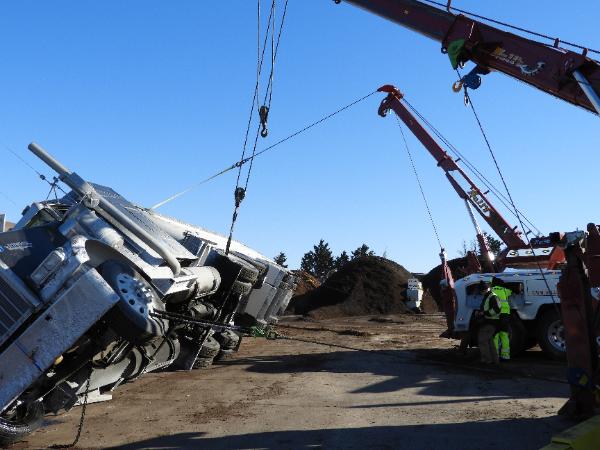 Contacted to respond to the Scott’s Company on Newark Road in Toughkenamon PA for a dump trailer and Kenworth
tractor that had overturned, we were advised that there was oil leaking from the truck.  The necessary equipment was
dispatched to the scene.

Upon arrival, a W900 Kenworth pulling an East frameless dump trailer was found to have been dumping it’s load when it
overturned onto the passenger side.  The truck and trailer both suffered significant damage.  There was fluids leaking
from the engine compartment along with hydraulic fluid leaking from the trailer’s cylinder.

The load remainder of the load was shoveled off.

The trailer was then winched to the collapsed position.  Once the trailer was collapsed, the truck and trailer were
uprighted.  The unit was slowly lowered back onto it’s wheels.  Once on it’s wheels, the rigging was removed, inspected,
and returned to it’s respective location.