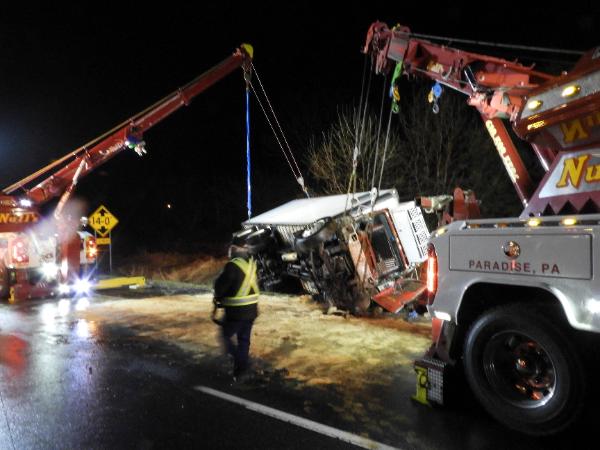 Contacted by the Police dispatch requesting us to respond to the Route 1 bypass northbound south of Route 10 for a
commercial motor vehicle accident.  We were advised that it was a tandem axle box truck that was overturned.

Based upon the information we were given, two of our specialized heavy duty sliding rotator recovery units were dispatched to
the scene along with a recovery supervisor.

Upon arrival, the International box truck was found to have been travelling northbound on the bypass between Scroggy Road
and Route 10 when it lost control and left the roadway.  The truck struck the embankment, spun 180 degrees, overturned
onto the driver’s side.  The hood was torn off of the truck.  The front axle was pushed back into the fuel tanks.  The driver’s
door was torn open and ripped around to the front of the truck.  The body on the  truck was severely twisted.  There were
several skids inside the box of the truck.  Both frame rails on the truck were kinked behind the cab.  The truck had an active
fuel, the fire department had attempted to contain the leak however they ran out of absorbents.

Null’s Recovery & Site Restoration were dispatched to the scene.

The northbound lanes of Route 1 were currently closed.  We were advised that the fire police which had the road closed were
only available for a short time.

We were requested by the investigating Trooper to stand-by while they photographed the scene.  The driver was reported to
have been severely injured.

Upon arrival of NR&SR, we worked to assist them with containing the fuel spill.  At that point, the leak had been temporarily
stopped.  However it was evident that the leak would come back during the recovery of the truck from the precarious location.

Two of our specialized portable light towers were set-up to provide a safe work zone in accordance with OSHA requirements.

Our recovery supervisor and operators worked to establish a recovery plan.

We were soon given the go ahead to begin the recovery.

The two rotators were positioned to lift the truck back to an upright position, hold it upright, lift it and set it back onto the
roadway.  Both rotators were set-up on work platforms.  Rigging was connected to the front of the truck to lift it and prevent
the front axle from being pushed further back into the fuel tank.  The front axle was chained in place.  Rigging was also
connected to the back of the truck.  Straps were placed under the box to lift it upright and over top of the box to control the
upright process.  All of the rigging would then be used in conjunction with lifting the truck back onto the roadway once it was
uprighted.  While the rigging was being done, one of our operators worked to remove the driveline.

With all rigging in place, it was tensioned and checked for proper connections.  The two rotators then worked together to lift
the truck back to an upright position and set it back onto the roadway.  The was a slow process and extreme care to be used
to ensure that the fuel tanks were not further compromised and to ensure that the frame was not further damaged which
would make the truck unable to be towed from the scene in a conventional manner.

Once the truck was back on the roadway, it was lowered back onto the ground.  The rigging was removed.  A majority of the
rigging was saturated in diesel fuel.  This rigging was loaded to be transported back to our facility for cleaning and inspection.

One of the rotators then towed the box truck southbound in the northbound lanes to the Route 472 exit where it turned
around and returned back to the proper direction of travel.  The severely damaged box truck was towed from the accident
scene to Null’s of Cochranville.  Once at Null’s, the truck was placed in our secure storage yard.  The rotator unhooked from
the truck.  The batteries were disconnected on the truck to prevent any risk of an electrical fire.

The recovery supervisor and second rotator remained onscene assisting NR&SR with cleaning up the fuel spill from the
accident scene.  Once the fuel spill was cleaned up, the remainder of our equipment cleared the scene.  The rigging that was
used for the recovery was washed and inspected, once the rigging was dry, it was returned to its respective location.

A HUGE THANK YOU TO THE UNION FIRE COMPANY NUMBER 1 OF OXFORD FOR THEIR
HELP WITH TRAFFIC CONTROL ON THIS INCIDENT.  AS ALWAYS IT IS GREATLY
APPRECIATED!