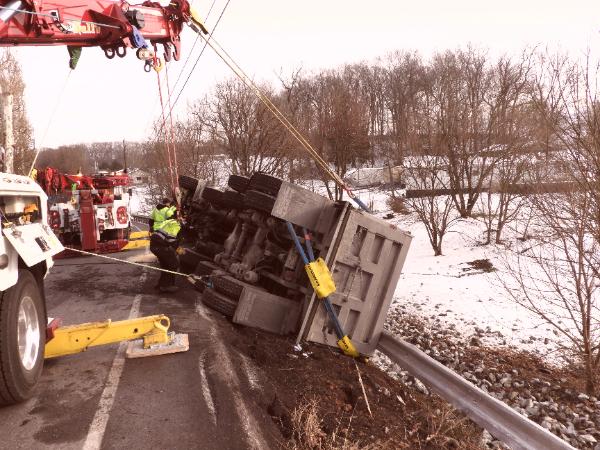 Contacted by the Pennsylvania State Police Lancaster Barracks requesting us to respond to Route 272 and Kirks Mill
Road in Little Britain Township for a fully loaded dump truck weighing 72,000 pounds that was overturned.

Based upon the information we were given, we dispatched two of our heavy duty sliding rotator recovery units, and our
skid steer loader.  Additionally, we contacted Null’s Recovery & Site Restoration to respond to the scene with one of
their incident response units and one of their trailers to transport the load from the scene.

Upon arrival, a Mack Granite four axle dump truck was found to have been travelling south on Route 272 from Pine
Grove Road towards Kirks Mill Road when it lost control and overturned. The truck crossed Kirks Mill Road and slammed
into the guard rail.  The truck was partially over the embankment and being held in place by the guard rail.  The truck
was laying past center on the passenger side.  The truck was in danger of falling the remainder of the way down the
steep embankment.  A majority of the load fell out of the truck’s bed, however, some of the load was still in the truck.
There were fluids leaking from the truck.  NR&SR was requested to contain the fluids.

The two rotators were positioned to bring the truck up the embankment clear of the guard rail and set it back upright
onto its wheels.  Straps were rigged to the rear of the truck to provide lift on the body as well as to control the landing of
the truck was it was brought upright.  A strap was also connected to the back of the truck to winch it up the embankment
clear of the guard rail.  These three straps were connected to the rotator that was positioned at the back of the dump
truck.

The rotator at the front of the unit was rigged to winch the front end up the embankment and pull it back to an upright
position.

The two rotators worked together to bring the truck clear of the guard rail, up the embankment, and back onto it’s
wheels.

Once on it’s wheels, both rotators were returned to travel position.  The rigging was removed, inspected, and returned
to its respective location.

The rotator at the back of the dump truck hooked to the rear end of the truck and prepared to tow it from the scene.
Wireless towlights and secondary attachments were installed.  The steering was secured.  The loose truck parts were
secured.  The truck was then moved so that clean up of the spill, truck parts, and roadway could take place.

Our personnel assisted NR&SR with the clean up before clearing the scene.

Once clear of the scene, the dump truck was towed to Null’s of Cochranville where it was placed in our secure storage
yard.  The truck’s cab was covered to prevent any damages.

A HUGE THANK YOU TO THE ROBERT FULTON FIRE COMPANY FOR THEIR
HELP ONSCENE.  AS ALWAYS, IT IS GREATLY APPRECIATED!