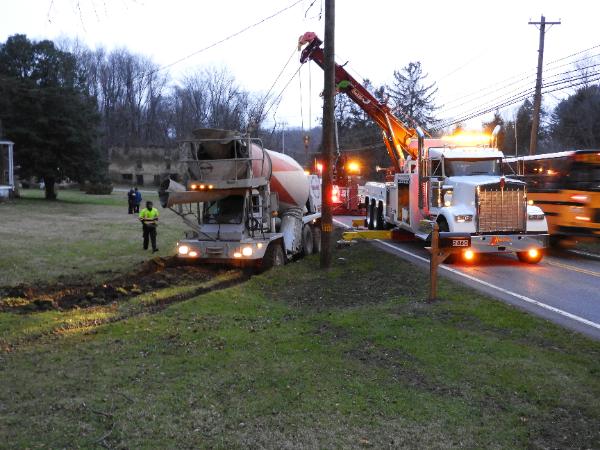 Contacted for a loaded concrete mixer that had ran off the roadway on Strasburg Road between Buck Run Road and
Youngsburg Road in East Fallowfield Township.  Based upon the information we were given, we immediately dispatched
two of our heavy duty wreckers to the scene.

Upon arrival, we found truck # 216 had been travelling east on Strasburg Road from Buck Run Road when it left the
right side of the roadway.  The mixer travelled down over a steep embankment that was approximately 3-4′ below the
grade of the roadway.  The mixer travelled approximately 100′ from the point of where it left the roadway to where it
initially stopped.  The driver then attempted to back the mixer out of the location where it came to rest.  The driver
backed directly into the mud and deep ruts that the mixer had initially travelled through when it left the roadway.  The
mixer then became stuck to the point that the axle housings were mired in mud.  There was a utility pole directly next to
the mixer.  There were multiple overhead lines that would complicate the recovery.

We were advised that there were concrete trucks that were going to be travelling through the scene as there was a
large pour going on which this truck had been on the way to.

The East Fallowfield Township Police Department was on-scene.  It was determined that due to there being no truck
friendly detour routes, that the recovery would have to be done without closing the roadway.  A plan was established to
recover the mixer with only closing one lane and having traffic control in place to control traffic through the scene while
the mixer was recovered.

The homeowner advised that there was a natural gas line buried from the pipeline to the house and that the tie in was
directly under where the mixer was currently sitting.  We thoroughly checked the area under and around the mixer and
could not locate the tie in shut off, any signs of burial tape, or any other signs of the tie in point.  We had one of our
personnel maintain a constant lookout for any signs of the line during the rigging and recovery process.  We also
altered the recovery plan to lift the low side of the mixer more so then initially planned to take extra precaution to avoid
the gas line if it was indeed under the truck.

Once the lane closure was in place, one of the heavy duty wreckers was positioned beside the mixer and rigged to hold
it upright.  It was also rigged to provide lift on the low side as a precautionary measure with the report of the
underground gas line.

The second heavy duty wrecker was positioned, at the rear of the mixer to winch it backwards back up the embankment
and onto the roadway.

The two wreckers worked together to winch the mixer rearward, up the embankment, and prevent it from overturning.