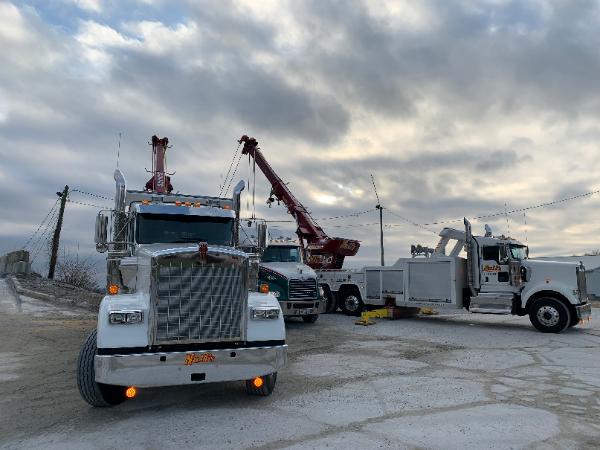 Contacted to respond to one of the local concrete plants for a loaded tractor and tanker trailer that had become hung
up on the driveway from the rear of the plant to the main road.  Being familiar with the location, two heavy duty wreckers
were dispatched to the scene.

Upon arrival, the tractor trailer had attempted to come up the ramp, the driver stated that he knew it was going to be
close so he got a run for it.  The unit hit the top of the ramp with enough momentum that after the landing gear and
pump module under the trailer struck the ground high centering the unit, it continued forward an additional three feet,
lifting the drive axles of the tractor and separating the truck and trailer’s fifth wheel plates.

Straps were connected to the trailer rear axles.  One wrecker was positioned on each side of the unit at the top of the
ramp.  The wreckers were rigged in a fashion to perform a “sling shot” technique on the loaded unit.  The two heavy
duty wreckers worked to lift the back of the trailer so that the pump module would not be damaged and further.  Once
lifted the unit was brought forwards the rest of the way up the ramp to the point that the trailer’s axles were clear of the
transition.

The unit was then able to continue under it’s own power.