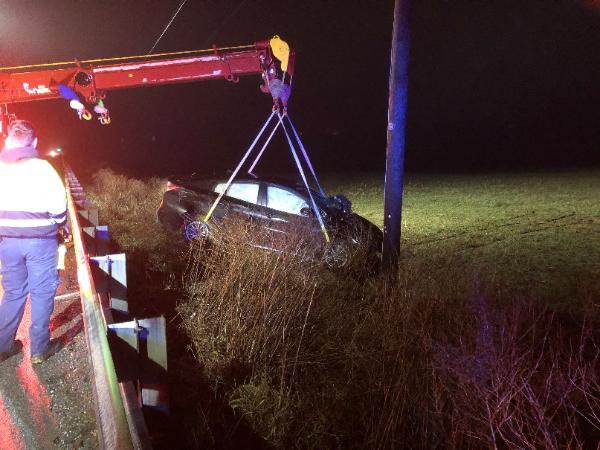 Contacted by the Pennsylvania State Police Avondale Barracks requesting us to respond to the area of 807 Gap
Newport Pike (Route 41) in West Fallowfield Township for a single vehicle accident.  We were advised that it was a
sedan that had crashed earlier in the night and that the vehicle was over an embankment and would have to be lifted up
the embankment and over top of the guard rail.

Based upon the information we were given, and being familiar with the location, we immediately dispatched one of our
long reach sliding rotator recovery units, one of our rollbacks, and contacted Null’s Recovery & Site Restoration to assist
with traffic control.

Upon arrival, one of our portable light towers were set-up.  NR&SR set up the lane closure of the northbound lane of
Route 41 allowing traffic to flow through the scene one direction at a time via the southbound lane.

It was found that a Toyota Prius had left the roadway in the area of 807 Gap Newport Pike, the vehicle travelled off the
roadway, struck a utility pole, and continued across a field coming to rest approximately 750′ from where it left the
roadway.  The vehicle had major damage.  PECO had been onscene and secured the electric making the area safe to
work.

The long reach sliding rotator recovery unit was set-up in the northbound lane and rigged to recover the vehicle.  The
vehicle was lifted up the embankment, over the guard rail, and set directly onto the bed of the awaiting rollback.  The
vehicle was secured via a four point tie down.

We worked with NR&SR to clean up the vehicle parts from the scene.  We also assisted the State Troopers with
searching the scene for items that had been lost by the vehicle operator.

Once clear of the scene, the vehicle was transported from the accident scene to our Cochranville facility where the
vehicle was placed in our secure storage yard.