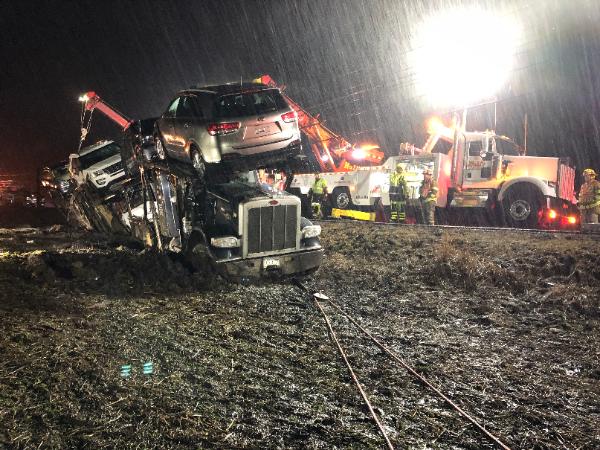 Contacted by the Pennsylvania State Police Lancaster Barracks requesting us to respond to Lincoln Highway in the
area of Slaymaker Hill Road in Paradise Township for a tractor trailer that was overturned. We were advised that it was a
car carrier that was loaded with cars, that it was overturned onto it’s passenger side, and that it was approximately 15′
off of the roadway. We were also advised that there was a large fuel spill.

Based upon the information we were given, we immediately dispatched a recovery supervisor and three of our heavy
duty sliding rotator recovery units to the scene.  Additionally, we contacted Null’s Recovery & Site Restoration to
respond to the scene to assist with the fuel spill.

Upon arrival of our first arriving operator, he met with the fire department and the investigating Trooper. He was advised
that when the truck overturned, it knocked over a utility pole and that the utility company was unable to provide and ETA
and were not sure if they were even going to respond or wait until the weather cleared. The fire department currently
had the westbound lane and the center turn lane closed and was routing traffic through the accident scene alternating
directions via the eastbound lane, we requested that NR&SR set-up advanced warning signs and additional cones to
provide a safe lane closure for the crews working onscene.

As additional personnel arrived, along with the recovery supervisor, a scene survey was performed. A Peterbilt tractor
trailer car carrier was found to have been travelling westbound on Lincoln Highway.  As the truck passed by the
Slaymaker Road intersection, for  unknown reasons, it left the right side of the roadway. The unit struck a utility pole,
went down over the embankment and overturned onto the passenger side. The unit suffered significant damage from
the impact with the pole and also going over the embankment into the extremely soft ground and deep mud.

The car carrier had a total of eight vehicles onboard, on the top rack front to back were:
Kia Serento
Dodge Durango RT
Ford Explorer
Honda CRV
Mercedes GL 450

On the bottom rack front to back were:
Daimler Ag Smart Fourtwo
Mercedes E 350
Mercedes E 400

The truck had a fuel leak.  The county HazMat team had a duty officer onscene however, they did not have any
resources onscene to pump the fuel tanks. We requested NR&SR to pump the upper fuel tank, which is the one that
appeared to be leaking, upon their arrival as the county HazMat was unable to give an ETA on their resources. NR&SR
arrived and  pumped the tank.

Portable light towers were set-up to provide a safe workzone for our personnel working onscene.

It was determined that due to the height of the unit once upright, it would be too high to be recovered back up the
embankment as it would become entangled in the utility lines.

A recovery plan was established.

The Honda was pulled back in place and re-secured to the trailer so that it would remain with the unit as it was
uprighted. Several of the ramps on the unit were secured in the lowered position to prevent them from causing damage
to the underside of the vehicles as the unit was being uprighted. The driveline was removed from the Peterbilt and an air
source was secured.

Two of the rotator recovery units were set-up on work platforms on Lincoln Highway parallel to where the unit came to
rest. Rigging was connected from the rotators to the car carrier unit. The two rotators worked together to lift the still fully
loaded car carrier unit back upright onto its wheels. Once the unit was uprighted, the two rotators held the unit upright to
prevent it from falling back over onto it’s side.

The third rotator recovery unit was positioned on Kinzer Road. Rigging was routed across the field. The unit had to be
winched approximately 500′ across the field to Kinzer road, where it could transition out of the field and onto the
roadway. Air was supplied to the unit in order to release the parking brakes.

All three rotators worked together to winch the unit down off of the embankment and hold it upright while doing so.

Once partially off of the embankment, one of the rotators was moved to the lower side of the incident on Kinzer Road to
help the rotator down there winch the unit towards the roadway.  Once the unit was completely clear of the
embankment,and no longer in danger of overturning, all of our equipment was moved off of Lincoln Highway on Kinzer
Road. Lincoln Hwy was then returned to normal traffic flow. The fire department and PSP then cleared the scene.

NR&SR’s excavator was used to clear the mud from around the unit as it was winched across the field towards Kinzer
Road. Approximately 3-4″ of rain had fallen throughout the night causing the ground to become extremely soft. The
excavator was also used to pull rigging across the field as needed.

Once the unit was winched to the point that one of the rotators could hook to the front of it, it was hooked and prepared
for tow. Secondary attachments and wireless towlights were installed. Service brakes were hooked to the trailer. Once
hooked up, the entire unit,  including the rotator were winched the remainder of the way onto the roadway. As much of
the mud as possible was cleared from the truck and trailer.

All of the rigging was gathered and loaded in the bucket of NR&SR’s excavator and carried to the roadway. The rigging
was loaded onto one of our rollbacks for transport back to our facility to be cleaned.

The still loaded truck and trailer were towed from the accident scene to Null’s of Cochranville where they were put in our
secure storage yard.

All of the rigging that was utilized was unloaded. The rigging was then pressure washed so that it could be inspected for
any damage. It was then hung to be dried. As it was hung, it was inspected. As the rigging dried, it was returned to its
respective location. All of the winch lines that were utilized were pulled off, cleaned and lubricated as necessary and
re-wrapped. Our equipment was made ready for the next call.

A HUGE THANK YOU TO THE KINZER FIRE COMPANY FOR ALL OF THEIR HELP ONSCENE WITH
TRAFFIC CONTROL AND SCENE SAFETY, AS ALWAYS, IT IS GREATLY APPRECIATED!