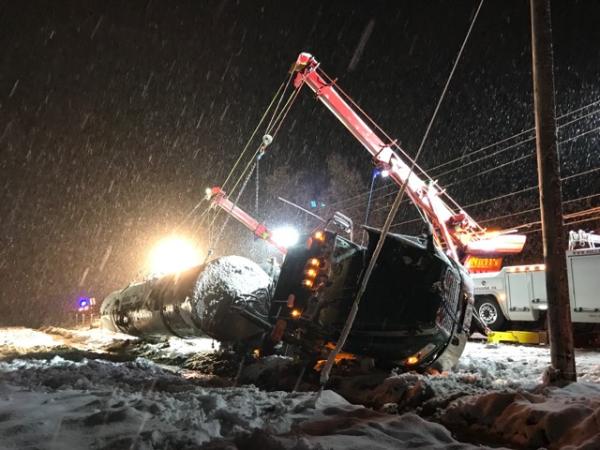 Contacted to respond to Beaver Valley Pike south of White Oak Road in Strasburg Township for a vehicle accident
involving an overturned, loaded milk tanker.  We were advised that there was a truck enroute to pump off the load of
milk.  Additionally, it was reported that there was milk leaking into the creek.  Based upon this information, we
immediately dispatched two of our heavy duty sliding rotator recovery units, and contacted Null’s Recovery & Site
Restoration to respond to the scene.

Upon arrival, a day cab Mack tractor pulling an 8,000 gallon stainless wrapped food grade tanker that was loaded with
milk, was found to have been travelling north on Beaver Valley Pike, when it was attempting to pull over to allow traffic to
pass.  The soft edge of the roadway pulled the unit off the side of the paved surface causing it to overturn.  The unit
came to rest in the Big Beaver Creek on it’s passenger side.  There was milk leaking from the hatches on the tanker.

Upon arrival of the Pennsylvania State Police Trooper, we were given the go ahead to begin uprighting the tanker and
recovering it back onto the roadway.

The first arriving rotator was positioned at the front of the unit and set-up on a work platform.  Ice cleats had to be used
as the roadway was extremely slick.  The second rotator was advised to back in to the scene from Main Street.  The
rotator at the front worked to rig the tractors front axle and rear drive axle to be “spiked”.  It also worked to place rigging
under the front end of the tanker, where the creek bank was dug out to allow rigging to pass through.  The spike lines
and the rigging under the tanker trailer were tensioned.  The second arriving rotator was set-up on a work platform with
ice cleats as well.  It rigged to the trailer to spike both of the trailer axles.  All of the rigging in place was tensioned.  The
rotators began to lift the trailer enough that additional rigging could be placed under the tanker.  In all, three two part
lines were rigged under the trailer to lift it in addition to the four spike lines that had been rigged.

The rotator at the front of the unit repositioned to lift and winch the front end of the tractor back onto the roadway.
Once on the roadway, the rotator hooked to the unit and prepared to tow it from the scene.   All of the rigging that was
used for the recovery was inspected and returned to its respective location.

The still loaded unit was moved forward so that NR&SR could clean the roadway of the dirt and debris.

The unit was then towed from the accident scene.

A HUGE THANK YOU TO THE QUARRYVILLE FIRE DEPARTMENT VOLUNTEERS FOR
ALL OF THEIR HELP!  AS ALWAYS, IT IS GREATLY APPRECIATED!