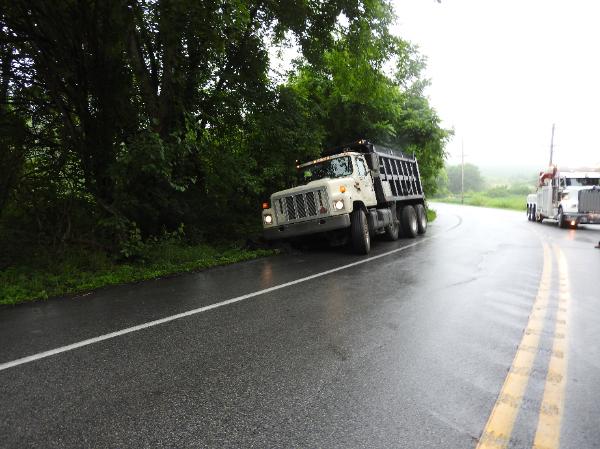 We were contacted by one of our customers requesting us to respond to Route 10 in the area of Old Race Track Road
for one of his loaded tri-axle dump trucks that had reportedly been run off the road by a tanker.  He stated that the truck
was in the ditch and ready to rollover.  Based upon the information we were given, two of our heavy duty sliding rotator
recovery units.

Several minutes later, at 0709, we were contacted by the Pennsylvania State Police Avondale Barracks requesting us to
respond to Route 10 and Old Racetrack Road in Highland Township for a vehicle accident involving two loaded tractor
trailers.  Additional reports from county radio indicated that there was a fuel spill.

Based upon the information we were given, we dispatched two heavy duty wreckers, two tractors, a flatbed, and
contacted Null’s Recovery & Site Restoration to respond to the scene for the fuel spill and other tasks needed to be
done to clear the roadway as quickly as possible.

Upon arrival, a Kenworth tractor pulling a flatbed trailer loaded with pallets was found to have been travelling
southbound on Route 10 and a Peterbilt tractor pulling a food grade tanker trailer was travelling northbound.  The two
tractor trailers collided.  A third loaded tractor, a Kenworth pulling a loaded tanker, travelling northbound was attempting
to avoid the collision when it went into the southbound lane, a southbound tri-axle, (the truck we were originally called
for), went off the right side of the roadway to avoid being hit head on by the third tractor trailer.

NR&SR was instructed to immediately address the fuel leak and spill on their arrival.  Our personnel assisted with
NR&SR with containing the fuel spill.  Our heavy duty wrecker was used to winch the damaged tractor out from under the
trailer.  The drive axles were chained in place.  The heavy duty wrecker hooked to the rear of the damaged tractor and
prepared to tow it from the scene.  Our tractor hooked to the trailer and prepared to transport it from the scene.   Our
crews worked to assist NR&SR with cleaning up the fuel and absorbents from the roadway.

One of our heavy duty wreckers was used to lift and hold the rear of the loaded trailer. NR&SR removed the wheels and
tires from the back axle.  The back axle was chained in place.  One of our tractors hooked to the trailer and prepared to
transport it from the accident scene to our facility.  The wheels and tires that were removed were loaded onto one of our
flatbeds to be transported from the scene.

The damaged Kenworth and both of the loaded trailers were transported from the accident scene to our facility.  Once
at our facility, the Kenworth and the tanker trailer were both placed in our secure storage yard.  The trucking company
of the tanker sent another trailer to transfer the load of food grade oil into.  The trucking company of the load of pallets
sent another tractor to repower the trailer and deliver the load.

Thankfully in all of this, there were no injuries to anyone involved in the accident.

A HUGE THANK YOU TO THE KEYSTONE VALLEY AND SADSBURYVILLE FIRE
DEPARTMENTS FOR THEIR HELP WITH TRAFFIC CONTROL ON THIS INCIDENT.  AS
ALWAYS, IT IS GREATLY APPRECIATED!