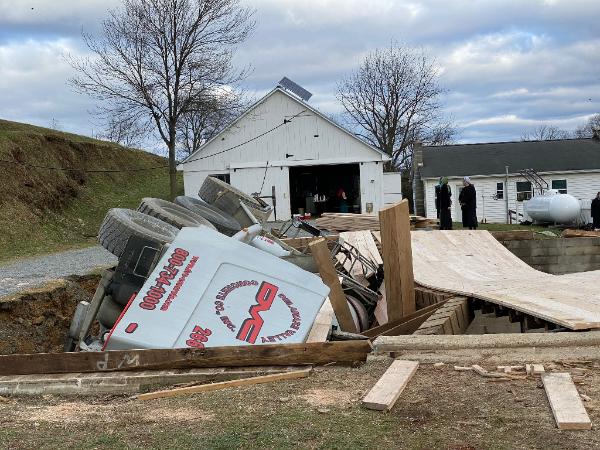 Contacted to respond to 592 Creek Road, Christiana for a concrete mixer that had overturned on a job site.  We were advised that the truck had overturned into the foundation of the structure that it was preparing to pour at.  We were also advised that the truck was fully loaded.  Based upon the information we were given, three of our heavy duty sliding rotator recovery units were dispatched to the scene.

Upon arrival, the site was found to be back a long narrow farm lane with limited access and limited room to work.  The mixer was being position on the rear side of the structure that was being worked on when the foundation wall of the building failed causing the embankment to give way and ultimately causing the mixer to slide down the embankment, overturning into the structure.  The mixer was laying nearly completely upside down and suffered significant damage.   Part of the structure was holding the mixer and prevented it from falling completely to the floor of the structure.  The mixer’s drum was dislodged from the truck, however was still partially held in place by the front rollers.

The scene was very unstable.  There was significant structural damage to the structure, making it very unsafe.  There was equipment and valuables in the structure.  Due to the soft ground and the steep hillside on the backside of the structure, the mixer could not safely be recovered from the top side where it was prior to overturning.

Our recovery team assessed the situation discussing multiple different options.  Ultimately it was determined that due to safety concerns, the mixer would need to be removed from the front of the structure.

Our recovery supervisor met with the property owner and discussed all of our concerns with him.  The property owner advised that the structure was a total loss and would need to be torn down prior to rebuilding.  It was determined that in order to remove the mixer from the site as efficiently as possible, that the flooring would be removed from the top of the foundation walls, the debris and damaged walls would then be removed, which would ultimately clear the recovery path for the mixer to be brought down off the embankment that it was laying on and to a position that it could safely be up-righted and removed from the structure.

At this point, the recovery supervisor requested that our mini-excavator, skid steer loader with grapple bucket, service truck with scene support equipment, and lowboy trailer to transport the drum from the scene all be dispatched to the scene.

While waiting for the additional resources to arrive, our crew worked with the construction crew onsite to remove as much as the equipment and other valuables from the structure that could safely be removed prior to the structure being demoed.

One of the rotators was moved into position to be used to pull the wall and flooring off of the foundation.  Rigging was connected in the necessary places to remove the front wall and the flooring.  Once this was done, a tele-handler that was onsite and our excavator were used to move the flooring to a nearby field so that it could be reused.  The excavator and our skid steer loader then worked together to clear the building materials and other debris from the area so that the mixer could be brought down the embankment to ground level and out of the structure.

Once the entire area was cleared out, a second rotator was moved into position.  The two rotators were connected to the mixer and worked together to winch the mixer off of the hillside and down onto the ground level.  At this point, the sun was beginning to set.  Two of our portable light towers were set-up onsite to provide a safe work area in accordance with OSHA regulations.

Once on the ground level, the mixer was winched towards the front of the building while being lifted to begin the process of uprighting the mixer.   The mixer was brought back to an upright position and lowered back to it’s wheels.

Once the mixer was upright, the two rotators re-rigged to the mixer’s drum so that it could be lifted off of the mixer’s chassis.  The fully loaded drum was lifted off of the chassis and set onto our lowboy trailer.  Once on the trailer, the drum was secured for transport from the scene.  One of the rotators then lifted the back end of the mixer and rotated it out of the structure to a position that the rotator could hook to it in order to tow it from the scene.

Both rotators were returned to travel position.  The rigging was inspected.  The rigging that needed to be cleaned and further inspected was loaded into our service truck for transport from the scene.  One of the rotators hooked to the rear of the mixer, the driveline was disconnected.  The axles were chained in place.  Tow lights and secondary attachments were installed.  The loose truck parts were secured.