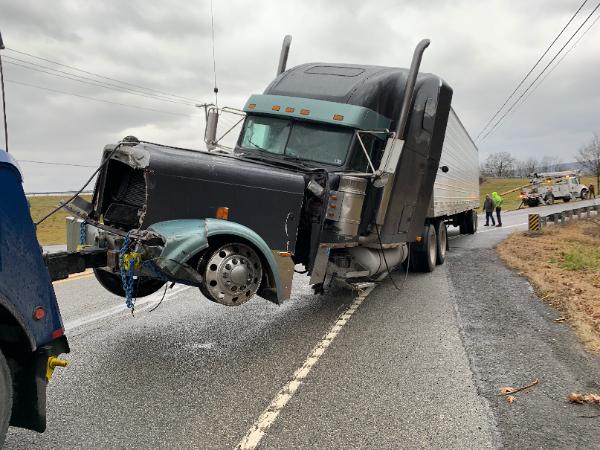 Contacted by one of our customers to respond to Route 522 and Route 30 in McConnellsburg PA for one of their
loaded tractor trailers that had just been involved in a collision.  We were advised that it was a major collision involving
two tractor trailers and several downed utility lines.

Based upon the information we were given, we immediately dispatched one of our heavy duty sliding rotator recovery
units, one of our lowbed trailers, and one of our tractors to repower the loaded trailer.  While enroute to the scene, we
contacted the police department that was handling the investigation.  They advised that we could respond to the scene.
Additionally, with the extended drive time, we contacted Del’s Towing and Recovery to respond to the scene to begin
clearing the roadway and advise if any additional equipment would be necessary.

Upon arrival, we worked with Del’s to get the unit moved out of the roadway to a nearby parking lot where the severely
damaged tractor could be loaded onto the lowboy and made ready to be transported back to our facility.  The tractor
trailer had to be winched out of the jack-knifed position.  It then had to be winched out from under the utility lines while
the utility company held the lines and damaged pole.  The unit was winched onto the roadway.

A tractor trailer had come off of Route 30, failed to stop at the stop sign coming directly into the path of the our
customer’s Freightliner tractor which was pulling a loaded 53′ van trailer.  The two tractor trailers collided in the middle of
the intersection causing major damage to both units.  The customer’s unit was forced into a jack-knifed position and slid
sideways, shearing off a utility pole.  The tractor was off the roadway, the trailer was blocking the roadway.  The frame
on the tractor was severely bent, the front axle was torn loose, the cab and sleeper were torn loose, the hood was
nearly ripped completely off the truck.  The trailer appeared to have the front wall pushed forward from the load shifting.

Once the unit was moved off the roadway, a Level One DOT inspection was performed by the investigating department.
We were then given the go ahead to begin the task of preparing the unit for transport from the scene.  The truck and
trailer were separated.  Our tractor was hooked to the trailer.  The trailer was transported to the Tractor Supply in
McConnellsburg where it was initially headed to make a delivery.  The delivery was made, the trailer was then
transported from the accident scene to customer’s York Terminal.

The truck was then transported from the accident scene to Null’s of Cochranville.

Once at our facility, the sliding rotator recovery unit and our wheel loader were used to lift the truck off of the lowbed
trailer.  Once off of the trailer, the truck was set in place in our secure storage yard.  The wheels and tires were
unloaded with the truck