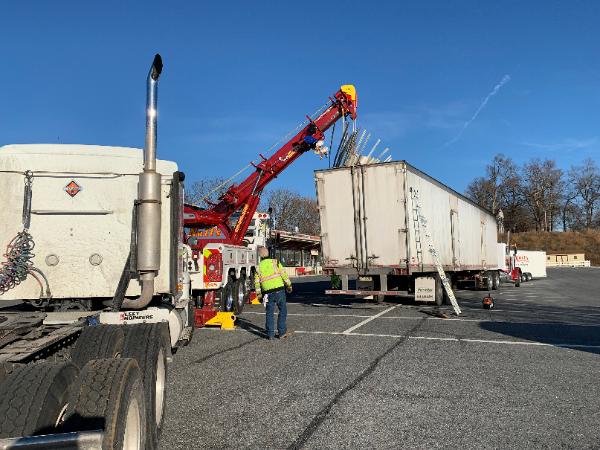 Contacted to respond to Lincoln Highway between Mcilvaine Road and Belmont Road for a loaded tractor trailer that
had struck multiple utility poles.  We were advised that the roof was torn out of the trailer.  Based upon the information
we were given, one of our heavy duty sliding rotator recovery units and a truck tractor were dispatched to the scene.

Additionally, we contacted Null’s Recovery & Site Restoration to respond to the scene. Upon arrival, an International
tractor pulling a 53′ van trailer loaded with potato chips was found to have been travelling eastbound on Lincoln Hwy
when for unknown reasons, it left the roadway.  The unit struck a utility pole.  The unit continued eastbound off of the
roadway where it struck a second pole with the driver’s side front end of the tractor.  This pole was completely sheered
off.  The base of the pole went under the unit, striking the front axle and air tank.  The top of the pole struck the top of
the tractor and then dropped down into the front of the trailer.  The unit continued eastbound with the pole in the trailer.
The pole ripped the roof to the back of the trailer, removing all of the crossmembers from the roofline.  The pole then
ripped the back door frame away from the side wall.  The unit continued eastbound striking a third utility pole before
coming to rest off the side of the roadway.

We were requested to stand-by until PP&L gave the all clear and for the arrival of a DOT Inspection Officer.

Once given the all clear by both PP&L and PSP, our crew worked to separate the truck and trailer.  We were advised by
the driver of the unit that the unit was locked up and would not freely roll.  The rotator recovery unit hooked to the front
of the tractor.  Air was supplied to release the brakes.  The truck and trailer were then separated. The driveline on the
tractor was disconnected.  The loose truck parts were secured.

Our tractor hooked to the trailer.  It was requested by PP&L that we move the trailer clear of the downed wires
immediately so that they could work to re-open the roadway. The trailer was moved to a parking lot at the scene of the
crash.

Once in the parking lot, NR&SR utilized a ladder to make access to the top of the trailer and assess the damage to the
roof.  It was found that the roof was torn almost completely loose.  It was unsafe for the trailer to travel with the roof in
the manner in which it was.  NR&SR utilized a saw to cut the roof the remainder of the way from the back door frame.
The rotator was then used to lift the roof off of the cargo and set it onto the ground where it was then cut into smaller
pieces.  The roof was then loaded onto one of our rollbacks and secured for transport.

The trailer walls were strapped together.  Straps were connected to the back door frame to pull it back forward in order
to  contain the cargo.  NR&SR worked to pick the truck and trailer parts up from the scene.

The damaged truck, trailer, and roof were then transported from the scene to Null’s of  Cochranville.  Once at our
facility, the trailer was placed inside to prevent any further damage from occurring to the cargo.  The truck was placed in
our  secure storage yard.