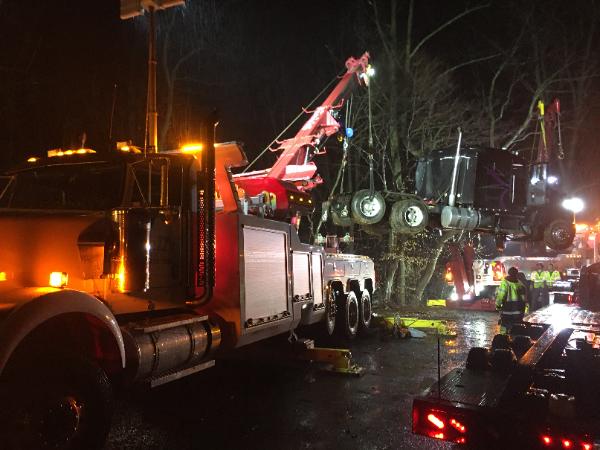 Based upon the information we were given, photos sent from the scene, and the requests, we dispatched two of our
heavy duty sliding rotator recovery units, one of our truck tractors, and Null’s Recovery & Site Restoration to the scene.

Upon arrival, a Mack tractor pulling a flatbed trailer loaded with crates for transporting live turkeys, which were full, was
found to have failed to navigate the curve in the road.  The unit left the roadway striking multiple trees before coming to
rest completely off the roadway with the tractor on top of several large trees and stumps. The tractor had major
suspension damage.  The cab and sleeper were shifted nearly four feet to the right side of the truck.  There was a fuel
spill and fuel still actively leaking from the truck.  There were several large trees down on and around the truck.  The
area was extremely muddy and very tight working conditions.

Based upon our findings, NR&SR was contacted and asked to send one of their roll-off dumpsters to the scene.
Additionally, our track skid loader and lowboy trailer were both dispatched to the scene.

We assisted NR&SR with containing the fuel spill.  Once the spill was contained, we worked to prepare the recovery path
for the unit.

Multiple trees had to be cut clear of the tractor trailer to provide a safe work area for our crew as the unit was rigged and
lifted to be recovered.  The tracked skid loader worked to lift the large parts off trees clear of the truck and out of the
roadway so the trailer and truck could be recovered.

The two sliding rotator recovery units were set-up on work platforms on the roadway.  One of the rotators hooked to the
rear of the trailer while the other hooked to the front of the trailer. The two rotators worked together to remove the
loaded trailer from the severely damaged tractor and recover it back onto the roadway.  The trailer was placed on the
roadway between the two rotators.  Once on the roadway, the landing gear was lowered.  The rigging was removed from
the trailer.

Our tractor then hooked to the trailer and prepared to transport it from the scene.  At this point, the company rep asked
if we could transport the trailer to the farm where it had been loaded so that it could be unloaded and the turkeys given
feed and water.  Once at the farm, the turkeys were not able to be unloaded.  At that point the trailer was transported to
our facility.

Once it was safe to move the truck, the two heavy duty sliding rotator recovery units set-up on work platforms one of the
rotators rigged to the front of the truck while the other rotator rigged to the rear of the truck.  The lowboy trailer was
moved into position to allow for the truck to be set onto the trailer once it was lifted clear of the wooded area.

The two rotators worked together to recover the truck back to the roadway where it was then set onto the lowboy trailer.
Once on the lowboy, the truck was secured for transport.  The truck’s cab was secured to the lowboy.  The rigging was
removed from the truck and returned to its respective location.  The rotators were returned to travel position. We worked
with NR&SR to continue to clean up the accident scene prior to clearing the scene.  Once a majority of the clean-up was
completed, our equipment began to clear the scene.  The severely damaged truck was transported from the accident
scene to Null’s of Cochranville where it was unloaded and placed in our secure storage yard.

Due to the amount of fuel that was spilled in the area, Null’s Recovery & Site Restoration will continue to monitor the
scene for several days to ensure that all of the fuel has been removed from the scene and that no additional fuel is able
to travel into and through the waterway.

A HUGE THANK YOU TO THE KEYSTONE VALLEY FIRE DEPARTMENT FOR THEIR
HELP ONSCENE AND WITH TRAFFIC CONTROL.