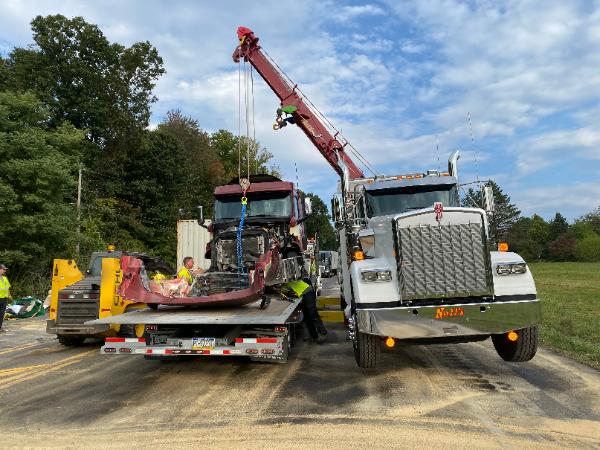 Contacted to respond to Route 41 and Zook Road in West Sadsbury Township for a serious motor vehicle collision
involving a tractor trailer and a sedan.  We were advised that there was a vehicle on fire, entrapment, and that a medical
helicopter was enroute to the scene.

One of our heavy duty sliding rotator recovery units, our Landoll trailer, a tractor to repower the trailer, a rollback for the
sedan, were all dispatched to the scene.  Our street sweeper was loaded onto one of our rollbacks and secured for
transport to the scene as well.

Upon arrival, the medical helicopter was on the ground awaiting to transport the patient from the scene.   Our crew
stood-by for a short time while the Police investigated the incident.   While standing by, a recovery plan was established
by the recovery supervisor and relayed to our crew.  It was found that a Freightliner tractor pulling a container chassis
with an empty container onboard had been traveling northbound on Route 41 when it was involved in a major collision
with a southbound Lexus sedan.  Both vehicles suffered catastrophic damages.

We were given the go ahead to begin the recovery and were advised that the vehicles were being impounded for the
time being.

Our tractor then hooked to the trailer and moved it from the immediate area so that clean-up of the spill could continue.
The hood and other vehicle parts were loaded onto the Landoll trailer and secured.

One of the rollbacks then recovered the Lexus from the ditch.  The Lexus was then loaded onto the rollback and
secured for transport from the scene.   Our crew worked with NR&SR to finish cleaning the roadway, and ditch where the
Lexus came to rest.  Once the scene was cleaned-up, our crew and equipment cleared the scene.

All vehicles involved were transported from the scene to Null’s of Cochranville where they were placed in our secure
storage yard.

A HUGE THANK YOU TO THE KEYSTONE VALLEY, COCHRANVILLE, CHRISTIANA, GAP, AND KINZER FIRE COMPANIES FOR THEIR HELP WITH TRAFFIC CONTROL DURING THIS INCIDENT.