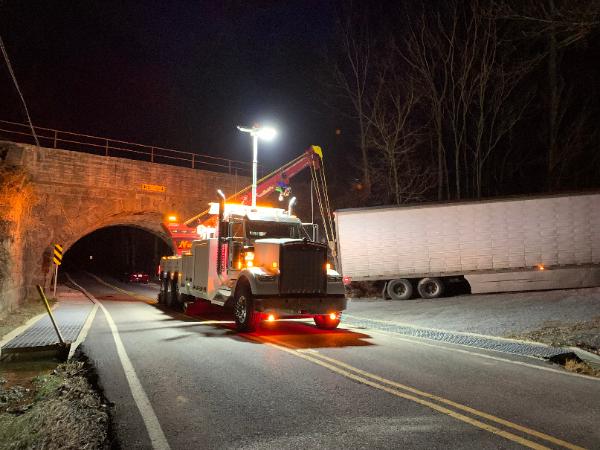 Contacted to respond to Pumping Station Road in the area of the Enola Low Grade for a loaded tractor trailer that had
reportedly slid off the roadway and was against a tree.  We were advised that they did not believe there was any
damage to the unit at this point.

R6 was dispatched to the scene and arrived to find that the driver was travelling northbound on Pumping Station Road
when he approached the low grade bridge, which is marked at 12′ 4″, he attempted to turn around on the access trail to
the Enola Low Grade Bike Trail.  The tractor slid sideways off the side of the trail causing the front of the trailer to hit a
tree, the front corner of the trailer and the reefer unit were against the tree. There was no way to access the front of the
unit to winch it forward away from the tree. The back end of the trailer was in danger of hitting the bridge wall, and the
trailer tandems were on an embankment.  The loaded trailer was leaning to the point that the driver’s side tandems
on the trailer were almost off the ground.

A recovery plan was established.

R6 was rigged to the truck and trailer to winch the unit sideways away from the tree.  Once clear of the tree, R6 lifted the
rear end of the and moved it clear of the bridge wall and embankment.  R6 continued to maintain a strap around the
back of the trailer to prevent it from overturning while it then winched the back of the tractor and front of the trailer
sideways back onto the trail.  Once the entire unit was back on the trail, the driver was able to back the unit off of the
trail and back onto the roadway.

R6 then escorted the driver to the main road