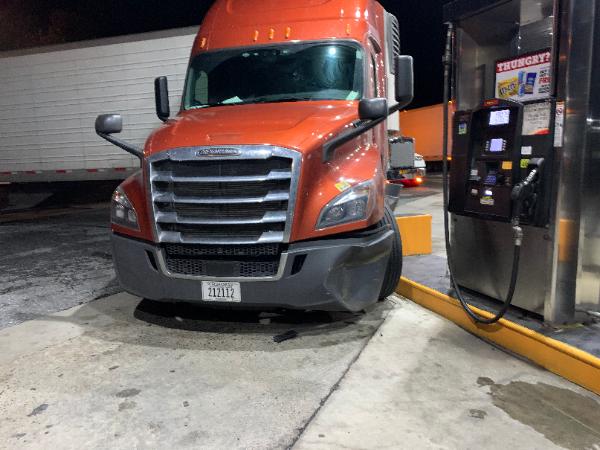 R6 was dispatched to the scene.

Upon arrival, the Freightliner tractor which was pulling an empty reefer trailer was found to have been turning around in
the truck stop parking lot, the unit was in a jack-knifed position. The front end of the truck struck the concrete island
protector causing significant damage.  The driver’s side front wheel went over the protector, the protector then entered
the battery compartment area breaking the battery mounts loose and pushing them back into the DEF tank.  The air
system, which is attached to the underside of the battery compartment was compromised.  At this point, prior to moving
the unit, we contacted the company to advise of the damages.  They requested that once recovered, the truck and
trailer be transported to the Freightliner dealer in Elkton Maryland.

It was determined that due to the unit being in a jack knife position, that the trailer would need to be separated from the
tractor.  Lifting straps were connected to the front of the trailer.  R6 lifted the trailer and separated it from the tractor.
One of our tractors was then hooked to the trailer and the trailer moved clear so that the damaged tractor could be lifted
off of the protector.

R6 lifted the tractor off of the protector and moved it sideways so that it could be set into the parking lot in a position that
R6 could hook to it to tow it from the scene.  The loose parts were removed and placed in the trailer, this included the
batteries, battery compartment, air tanks, and fairing.  The front bumper and other loose but still attached items were
secured.  R6 hooked to the rear of the tractor and prepared to tow it from the scene.

The truck and trailer, along with the truck’s occupants were transported from the scene to Elkton Freightliner.