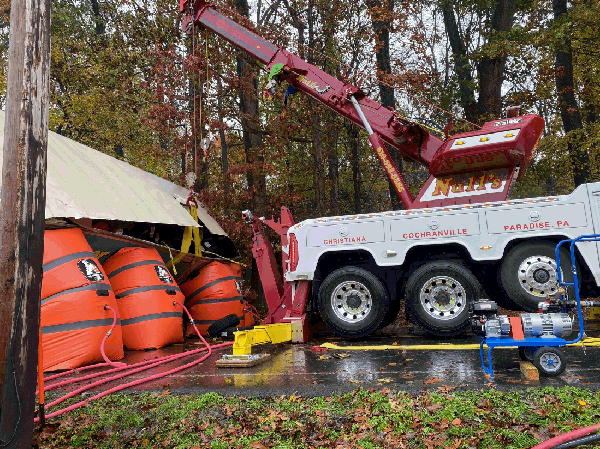 Contacted to respond to Lewisville Road and Glen Hope Road for a box truck that was involved in an accident.   Additional reports indicated that it was a box truck hauling tires that was overturned and had the roof blown out of it.

Based upon the information that was gathered, we dispatched one of our heavy duty sliding rotator recovery units, a heavy duty sliding boom wrecker, and our air cushion response unit.  We also contacted Null’s Recovery & Site Restoration to respond to the scene.

Upon arrival, the Freightliner box truck fully loaded with tires was found to be laying on the passenger side, perpendicular to the roadway with major damage.  The roof was torn away from the wall, some of the tires had fallen out of the box onto the roadway.  The front end of the truck was on an embankment and into the woods.

Once on it’s wheels, the rotator held the passenger side wall in place while straps were placed around the box to prevent the wall from blowing out.  Once the walls were secured, all of the rigging was removed.  The rigging was placed in NR&SR’s service truck for transport from the scene back to our facility for cleaning.  The rotator then lifted the front of the truck and set it back onto the roadway so that the wrecker could hook to the front of it to tow it from the scene.

The tires that had fallen out were loaded into one of NR&SR’s units for transport from the scene to our storage yard.

The air cushions were deflated and re-loaded in the response unit to be transported back to our facility for cleaning.   We assisted NR&SR with cleaning up the scene.  Once the scene was cleaned up, the  box truck was transported from the accident scene to Null’s of Cochranville were it was placed in our secure storage yard.

The rigging and air cushions were cleaned, allowed to dry, and returned to their respective location.

A HUGE THANK YOU TO THE UNION FIRE COMPANY #1 OF OXFORD AND THE WEST GROVE FIRE COMPANY FIRE POLICE FOR THEIR HELP WITH TRAFFIC CONTROL AND SCENE SAFETY!  AS ALWAYS, IT IS GREATLY APPRECIATED!