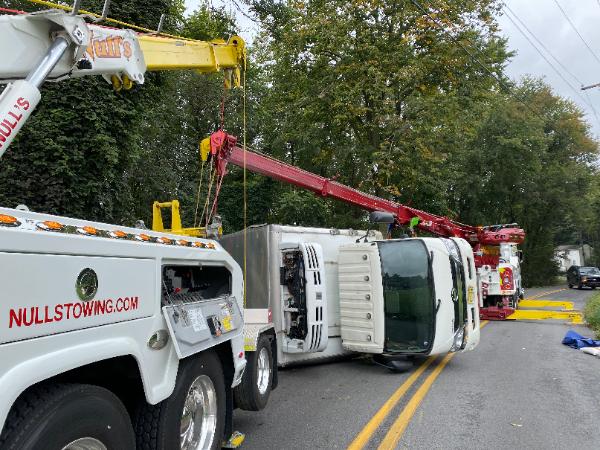 Contacted to respond to Paschall Mill Road in the area of Baltimore Pike for a fully loaded box truck with an unknown
weight that was overturned.  Based upon the information we were given, a recovery supervisor, one of our heavy duty
sliding rotator recovery units, and one of our sliding boom wreckers were dispatched to the scene.  Null’s Recovery &
Site Restoration was also dispatched to the scene to assist with the scene clean up.

Upon arrival, the Hino box truck was found to have been traveling on Paschall Mill Road towards Baltimore Pike when it
lost control, left the roadway, and overturned onto the passenger side.  The truck was reported to be loaded with
mushrooms.  The truck was leaking fluids from the engine compartment.

The heavy duty sliding boom wrecker was positioned on the top side of the truck and set up to perform a reverse roll.  A
strap was placed under the box and rigged to the wrecker.  Upon performing the initial pick it was noted that the truck
seemed to be overweight.  The heavy duty sliding rotator recovery unit was positioned on the bottom side of the truck
and set-up to lift the box and load back to an upright position.  In all, three recovery straps were placed under the box.
Aluminum angle irons were put in place to prevent and further damage from occurring to the box while it was being
uprighted.  The driveshaft was removed from the truck in preparation for towing it from the scene.

The rotator and wrecker worked together to lift the truck and cargo back to an upright position.  While being uprighted, a
landing cushion was put in place under the truck’s drive axle to slowly lower to an upright position and prevent it from
trying to overturn onto the opposite side.  The truck was successfully uprighted and lowered back down to it’s wheels.
Once on it’s wheels, the rotator re-rigged and lifted the back end of the truck and set it back onto the roadway.

Both the rotator and the wrecker removed their rigging, it was inspected and returned to it’s respective location.  The
wrecker then hooked to the truck and prepared to tow it from the scene.  We then assisted NR&SR with cleaning up the
fluids and debris from the roadway.

Our equipment then cleared the scene.  The truck was towed from the accident scene to Null’s of Cochranville where it
was placed in our secure storage yard to await inspection of the load by the health department.