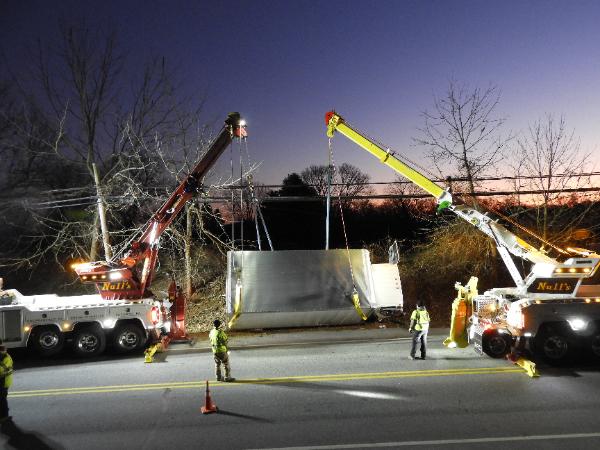 Contacted by PSP Avondale to respond to Baltimore Pike and Sumner Lane in Penn Township for a commercial motor
vehicle accident. We were advised it was a box truck that was overturned. We were advised that the box truck was
loaded with an unknown amount of weight and that there was some type of powered fork truck inside.

Based upon the information we were given, we dispatched two of our heavy duty sliding rotator recovery units to the
scene. Additionally, we contacted Null’s Recovery & Site Restoration to respond to the scene.

Upon arrival, an Isuzu box truck was found to be laying on the passenger side against an embankment with heavy front
end damage. The two rotators were set-up on work platforms. Straps were placed under the truck’s box. Straps were
also placed over the truck’s box. The two rotators were rigged to lift the box truck partially upright and then slide it away
from the embankment. The truck was slowly lowered back onto it’s wheels and brought away from the embankment.

The rigging was removed, the rotators were returned to travel position. One of the rotators then hooked to the front of
the box truck to tow it from the scene.

We assisted NR&SR with cleaning up the truck parts, debris, and fluids from the scene. The box truck was then towed
from the accident scene to Null’s of Cochranville where it was placed in our secure storage yard.

While operating onscene of this incident, a motor vehicle operator who was travelling through the accident scene was
stopped under suspicion of DUI and subsequently placed under arrest.  Of course, all parties are presumed innocent
until proven guilty.  We are very thankful this person was stopped before they caused harm to anyone.

A HUGE THANK YOU TO THE WEST GROVE FIRE COMPANY FIRE POLICE FOR THEIR HELP ONSCENE WITH SCENE SAFETY AND TRAFFIC CONTROL.