Loaded tanker off the roadway in Earl Twp. 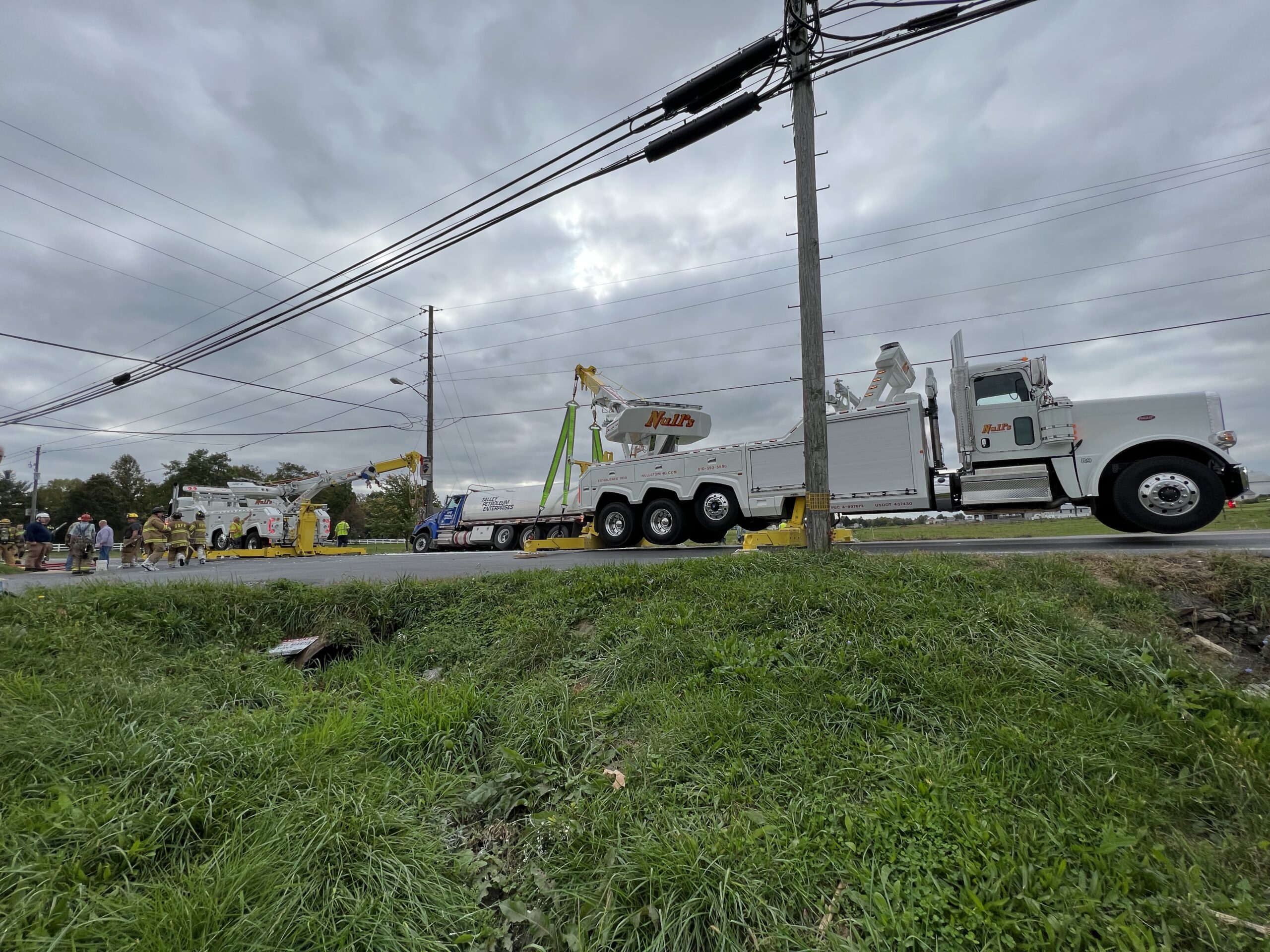 Contacted to respond to Railroad Ave and Spruce St in Earl Township for a four axle tanker truck that was hauling a mixed load of diesel fuel and gasoline that had been involved in an accident. We were advised that the truck was off the roadway, leaking, and in danger of overturning. Photos were sent to our recovery supervisor from the scene.

Based upon the information we were given and the photos from the scene, it was determined that two of our heavy duty sliding rotator recovery units would be dispatched. We also contacted Null’s Recovery & Site Restoration to the scene due to the leak.

Upon arrival, it was found that the Western Star tanker truck hauling a reported 3,800 gallons of product was travelling southbound on Railroad Ave, when it was involved in a collision with a car. The truck then left the roadway, struck a culvert, went partially over the embankment and struck a utility pole. The truck came to rest on the embankment severely leaning and extremely unstable. When the truck struck the culvert, it knocked the truck’s product pump breaking the piping from the tank to the pump. The tanks emergency shut off valves held and stopped the product from spilling out of the tank. It was determined that the leak was isolated to the amount of fuel that was in the piping only.

The truck was in very close proximity to a creek which was reported to supply the drinking water to New Holland.

There were air lines visibly damaged underneath the truck as well.

The fire department had sprayed foam in the area to ensure no fires or explosions occurred due to the gasoline and fuel that had leaked out. They had also placed stabilization struts on the truck to hold it upright from overturning.

Our team established a recovery plan. The plan was discussed with HazMat, PP&L, and the fire department. All involved parties were in agreeance with the plan and gave us the go ahead to begin the recovery.

One of the rotators was positioned at the front of the truck and rigged to lift the front of the truck clear of the pole and back onto the roadway. The second rotator was rigged to the back of the truck, straps were placed around the tank and connected to the truck’s wheels. The two rotators then worked together to lift the truck back to an upright / level position, lifting it up the embankment and setting it back onto the roadway. NR&SR along with HazMat stood by prepared to deploy absorbents and containment equipment in the event any leaks were found during the recovery.

Once the truck was back on the roadway, the rigging was removed and returned to it’s respective location. The rotators were returned to travel position. HazMat inspected the truck and secured the piping so that the truck could be transported from the scene. One of the rotators hooked to the truck and prepared to tow it from the scene. The driveline was disconnected, the brakes were caged on the truck due to the air leaks not allowing the brakes to be released. We assisted with cleaning up the roadway. The scene was turned over to HazMat and trucking company officials for further clean-up actions. The truck was towed from the accident scene to Null’s of Cochranville where it was placed in our secure storage yard.

Thank you to the Garden Spot Fire Rescue, Lancaster County HazMat, and other assisting agencies for their help on-scene. As always, it is greatly appreciated!