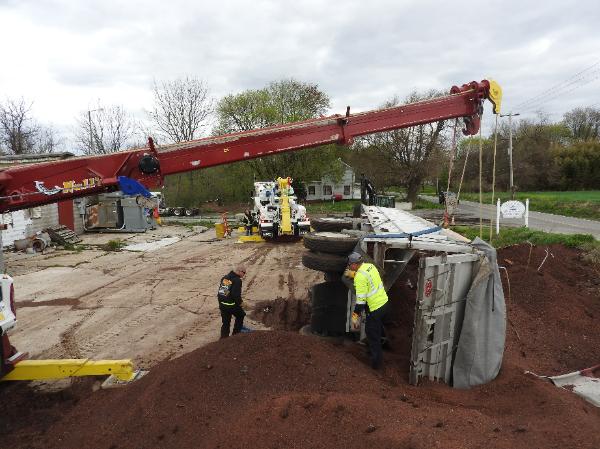 Contacted by one of our customers requesting us to respond to Hopewell Road in Rising Sun, Maryland for one of their
tractor trailer dump trailers that had overturned. They advised that the unit was in the process of dumping at the delivery
location when the unit overturned. They advised that their personnel onscene were reporting that the trailer was
approximately 3/4 full of cocoa beans. They also advised that we would need to send the necessary equipment to
handle off-loading the product and uprighting the unit in order to remove it from the scene. We were advised that at this
point, the cargo could remain onsite as he did not believe there were any contamination issues.

Based upon the information we were given, we immediately dispatched two of our heavy duty sliding rotator recovery
units, and contacted Null’s Recovery & Site Restoration to respond with one of their Incident Response Units and their
excavator to assist with off-loading the remainder of the cargo. One of our rollbacks picked-up Null’s excavator to
transport it from their facility to the accident site.

Upon arrival, a daycab Mack tractor pulling a Dorsey frameless spread axle dump trailer was found to have been
dumping on the concrete pad when for unknown reasons, the unit overturned onto the passenger side. The trailer had
three of it’s telescopic cylinder sections extended. The tractor’s cab appeared to have suffered significant damage. The
trailer’s tarp and bows were stuck under the load. There were fluids leaking from the truck’s engine compartment.

NR&SR was requested to handle the fluids that were leaking and begin off-loading the trailer’s cargo.

NR&SR’s excavator was having access issues due to the embankment at the top side of the trailer. It was determined
that the trailer could be moved to allow the excavator better access. One of the rotators rigged to the front of the trailer
and moved it away from the embankment. NR&SR was then able to unloaded a majority of the cargo.

One of the rotators rigged to the trailer’s fifth wheel plate to lift and hold it in place while  NRS&R worked to remove the
fitting of the hydraulic hose from the trailer, the hose was  placed into a 55 gallon drum so that the hydraulic oil could be
contained as the cylinder and drafting arms were collapsed back to the transport position. The rotator then collapsed
the cylinder returning it and the draft arms back to travel position. The draft arms were secured in place and the fitting
reinstalled. While this was being done, the two rotators worked to rig the trailer to perform a mid air roll, and relocate the
trailer once it was on it’s wheels so that it could be set back onto the concrete pad.

Once a majority of the cargo was unloaded, the two rotators worked together to lift the trailer off of it’s side into mid air.
The trailer was then rotated away from the piles so that it could be uprighted. The trailer was returned back to an upright
position. Once upright, the two  rotators worked together to rotate the trailer and set it in between the rotators on the
concrete pad so that it could be hooked to in order to be towed from the scene.

The rigging was then removed, inspected, and returned to it’s respective location. The rotators were returned to travel
position. One of the rotators hooked to the front of the trailer and prepared to tow it from the scene. Air was supplied to
release the brakes, secondary attachments and wireless towlights were installed. The loose trailer parts were secured.
The other rotator hooked to the back of the tractor. The hood and toolbox were secured. The front drive axle was
chained in place, the exhaust was covered, wireless towlights and secondary attachments were installed.

Our personnel then worked with NR&SR to remove the trailer’s tarp, side boards, and other vehicle parts from under the
cargo. The excavator was used to dig the items out from under the pile and then load them into the trailer for transport
from the scene. Once all of the parts and pieces were believed to have been located, the excavator was reloaded for
transport back to NR&SR’s facility. All of our equipment then cleared the scene.

The truck and trailer were transported back to our Cochranville facility where they were placed in our secure storage
yard.